Nominees Named for the 2017 Dragon Award 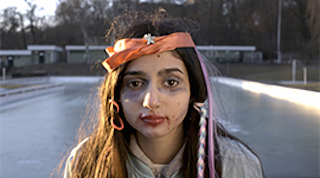 Syrian dreams of freedom, young women’s sexual fantasies and an intellectual playboy are among the subjects found in the eight films nominated for the 2017 Dragon Award for the Best Nordic Documentary. The grand prize of 100,000 krona is one of the largest awards for documentary film in the Nordic countries.

The Swedish Union of Tenants (Hyresgästföreningen) is a new collaborating partner for 2017.

“Nordic documentary film maintains a high level of quality internationally and this year’s films are exceptionally strong—both artistically and thematically. Several filmmakers have taken interest in the ongoing refugee crisis and migration is also a subject in several films, such as Citizen Schein and Shapeshifters,” says Jonas Holmberg, artistic director at the festival.

Four world premieres are competing along side some of this year’s most-honored documentary films that have already won significant awards globally. The Danish film, The War Show, was extolled in Venice and the Norwegian, Nowhere to Hide, won the main award at the world’s largest documentary festival, IDFA.

The world premieres include Citizen Schein (Kersti Grunditz Brennan, Jannike Åhlund and the director of Palme, Maud Nycander) about the player who changed Swedish film and the debuting director Theresa Traore Dahlberg’s Ouaga Girls about teenage girls studying to be auto mechanics in Burkina Faso. Frida and Lasse Barkfors have followed up on their renowned Pervert Park with the chilling Death of a Child and Sophie Vukovićis debuting with Shapeshifters, a personal portrayal of in-betweenness.

The Swedish Union of Tenants has contributed to the award as presenting partner. The winning filmmaker will receive 100,000 krona, which makes this one of the largest documentary film awards in the Nordic countries.

“Documentary film provides in-depth treatment that is necessary for understanding the complex societal challenges we face,” says Anna Lönn Lundbäck, regional head of the Swedish Union of Tenants in West Sweden. “For example, the Swedish housing shortage and segregation. By supporting documentary film, we are able to participate in the pertinent democratic dialog. As a popular movement we are eager to contribute to that.”

The award will be presented on February 4 at the Dragon Awards gala.