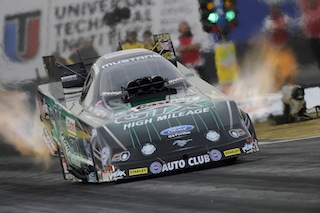 Fire Breathing Monsters is an aggressive and noisy – yet surprisingly intimate – tribute to the cars that run in the National Hot Rod Association Mello Yello Drag Racing Series.  Commissioned by Jim Jannard, founder of Red Digital Cinema, on behalf of the NHRA, the seven-minute documentary spotlights the uniquely American passion for speed and can now be found below on NHRA’s YouTube channel.

NHRA drag racing was on display at the Circle K NHRA Winternationals in Pomona, California, and can only be described as a raw demonstration of massive horsepower where, from a standing start, racecars can reach speeds of 330 mph and travel 1,000 feet in less than four seconds.  With the nitromethane burning, primal-screaming engines producing 10,000 horsepower, NHRA drag racing is simply the fastest sport on the planet.

Green Dot Films director Brent Thomas jumped at the chance to make the film. “It’s a thrill when you get the opportunity to relive one of the special pleasures of your youth,” Thomas said.  “As a kid, Lions Drag Strip in Long Beach was where we spent our Friday nights.  The sport has since grown to become an unexpected exhibition of technical awesomeness, but that added power of nostalgia is still like traveling back in time for me.”

The mission was to document the series’ historic season-opening race at Auto Club Raceway at Pomona.  With thousands of fans, hundreds of racers and their crews, capturing the emotional peaks and valleys of good and bad runs became second nature to the film crew as it had a rich tableau of iconic imagery at its disposal.

“My assignment was to point the cameras at anything that looked interesting and helped explain the attraction of this remarkable motorsport,” Thomas said.  “A critical part of this was hours of interviews with drivers and their crews.  By the end, we shot 24 hours of content – the digital equivalent to 140,000 feet of film.”

“Seeing a top fuel dragster and a funny car in person is an unbelievable experience,” said NHRA president Tom Compton, “and this documentary brings that experience to life.  Viewers will understand what makes NHRA drag racing so special.”