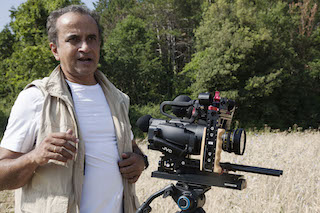 Sanjeev Chatterjee, professor at the University of Miami School of Communication in Coral Gables, Florida, is shooting a documentary about different approaches to healthy eating. He began gathering interview footage in Europe this summer, and anticipates the multi-year project will grow in scope and take him to locations around the world.

His plan is to build an audience and expand the project’s scope by producing a short film for his site, www.mediaforchange.org. Eventually, Chatterjee plans to produce a feature-length documentary.

“My interest stems from observing people making very deliberate choices about food,” he explained. “It’s mostly about living a healthy life, but what does that mean? For some, the answer to food is in the past. For others, it is in the future. Our relationship to food is changing, and I want to use diet as a way of exploring this shifting relationship.”

With his 15-year-old daughter, Uma, serving as production assistant, Chatterjee visited with a chef in Paris who cooks French food with an Asian influence, an organic farmer in Umbria who grows ancient grains to produce gluten-free pastas, and a dietician in Vienna who studies alternatives to meat. They also visited Expo Milano 2015 in Milan to learn about global food trends.

Beyond interview footage and picturesque “B” roll of golden wheat fields, food preparation and consumption, and more, Chatterjee captured a number of time-lapse shots with his GY-LS300. “I love the fact that the camera uses SDHC cards and that they are swappable,” he said. “I used that feature quite a bit. It was seamless on my NLE – there was no frame skip from one file to the other.”

The GY-LS300 was paired with three Canon EF lenses (using a Metabones lens adapter) and two Veydra Mini Prime MFT lenses. JVC’s Variable Scan Mapping electronically adapts the active area of the camera’s image sensor to maintain the native angle of view for a variety of lenses, and Chatterjee said the technology worked perfectly. “I like the idea that I didn’t have to do things in editing to adjust the frame size of different lenses,” he explained. “That really was an attractive feature for me.”

Chatterjee also brought a Canon DSLR as a backup, but said it “doesn’t yet feel like a video camera to me. The GY-LS300 looks right. It feels complete. In combination with a Zacuto Recoil rig, the JVC GY-LS300 really balanced well on the shoulder and on the tripod. This was a much better option. I like the quality very much.”

Designed for documentarians, cinematographers, and broadcast production departments, the GY-LS300 accommodates a variety of workflows with the latest advancements in 4K imaging and efficient encoding. It features JVC’s 4K Super 35mm CMOS sensor and records a variety of 4K, HD, SD, and Web-friendly proxy formats. It also includes a built-in HD streaming engine with Wi-Fi and 4G LTE connectivity for live HD transmission directly to hardware decoders, as well as support for various streaming protocols for direct streaming to Ustream, YouTube, and other content delivery networks.