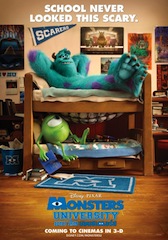 There’s a whole college catalog of life lessons in this movie, but those lessons are pronounced rather than being tucked carefully into the story. Monsters University is more colorful than creative, fast-paced but a bit formulaic without being surprisingly funny. With the exception of Mike (Crystal) and Sully (Goodman), its characters don’t have much depth of character. So many of the monsters look different, but they’re variations on basic geometric shapes and their personalities are too much the same. What could have been an imaginative recreation of the multiple experiences of college life has been reduced to a Scaring Test and a Scaring Contest. They’re two versions of the same thing. What could have been a creative commentary on the curriculum of monster subjects is reduced to one subject: scare techniques. What could have been a funny portrayal of the unique wackiness of college students stays focused on Mike and Sully. The visual design is colorful, the textures are detailed, and animation is impressive, but there’s not as much heart and humanity as in the best Pixar movies. There are few surprises in here, no ah-ha moments, no special memories that linger after the film finishes.  This prequel seems to have been made not to re-boot the franchise, but to sell stuffed merchandise. In the end, the movie – like the name of the fraternity Mike and Sully form – Oozyma Kappa – is okay. Just OK.