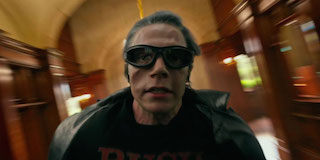 X-Men: Apocalypse, the latest entrant in Twentieth Century Fox’s popular superhero franchise, features more time-bending magic from Australia’s Rising Sun Pictures. The visual effects studio contributed to several key sequences in the film, most notably an electrifying scene where Quicksilver (Evan Peters) uses his hyper-speed ability to rescue students from an exploding mansion. Quicksilver’s Rescue builds on a notable scene from the preceding X-Men: Days of Future Past where the character races around a Pentagon cafeteria to prevent security guards from shooting a trio of X-Men. RSP’s impeccable work in making pots, pans, bullets and water drops freeze in mid-air helped the film earn an Academy Award nomination for Best Visual Effects.

The new film takes Quicksilver’s superhero antics to a new level. As an explosion rips through Professor Xavier’s School for Gifted Youngsters, the speedy mutant races from room to room rescuing students (while pausing to sip a soda and consume a slice of pizza) with everything set to the Eurythmics classic Sweet Dreams (Are Made of This). Where the last time the trick included choreographing thousands of falling water drops, this time it was particles of exploding debris, giant fireballs and one very lucky dog.

RSP’s team, led by visual effects supervisors Tim Crosbie and Dennis Jones and working under the direction of director Bryan Singer and production visual effects supervisors John Dykstra and Matt Sloan, had the advantage of having worked with Quicksilver before, but faced the challenge of exceeding their previous, award-winning effort. “For the last film, we had to figure out what makes Quicksilver tick, how to get it on film and how to make it believable,” said Jones. “But we were lucky, because it all happened in one room. This time, he moves through ten locations each with a unique story point. Everything is bigger and bolder.” 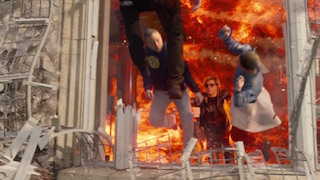 The transition from real time to Quicksilver time occurs just as the explosion that will take down the school begins to erupt. A car carrying Cyclops and Nightcrawler slows to a near halt. Bees freeze in midair. That part of the sequence was created by knitting together several motion control plates, shot at high frame rate, with digital mansion and bee elements, and pyrotechnics.

At that point Quicksilver appears (moving in apparent real time). He saves a group of kids in the building’s lobby by tossing them out a window. As the students fly away, they slow down. “Each of the characters had to be stabilized, repositioned and frozen in time,” recalled Jones. “The room is filled with frozen debris and, in the background, a fireball is approaching through a hallway. In terms of challenges, that scene had it all.”

Live action elements for the various rooms were shot on practical sets, but as the explosion proceeded, parts of rooms needed to be replaced with digital elements showing them being torn apart. In fact, the entire process of the explosion was carefully choreographed. “In the initial shots, a pressure wave moves through the building, carrying with it debris and a nice, velvety buffer of dust,” said Jones. “By the end of the sequence the dust is gone and we are left with a naked, oily fireball.”

Managing massive amounts dust, fire and debris, slowed down more than 1000 times required tremendous computing power and data management, and efficient workflow design. But it wasn’t all number crunching; artists also got to indulge in bits of fun. Quicksilver is a whimsical character and punctuates his life-saving work by pausing to eat and drink, and otherwise toy with his immobile environment. RSP artists manipulated Quicksilver’s surroundings to heighten the comic effect. “We looked for ways to ratchet up the sense of danger,” Jones said. “Quicksilver is a very playful guy, but he’s always operating right at the limit. If he does one more moon walk or pulls one more gag, someone is going to die.”

One of Quicksilver’s last-minute rescues is a dog (played by Bryan Singer’s pet boxer). Jones noted that the team relished the opportunity to send the canine on his way, his ears flapping and tongue wagging in super slow motion. “That’s the dream,” he said. “You forget about all the nuts and bolt and focus on telling a good story.”

RSP created a number of other effects for the film including one where a young Cyclops accidentally destroys a tree that had been a favorite of Professor Xavier. The digital mansion that the studio built recurs at several points in the film. But for sheer energy and visual fun, Quicksilver’s Rescue is most likely to impress audiences. It’s a real show stopper, no pun intended.