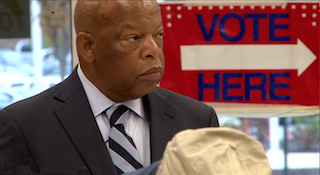 AlphaDogs has completed work on the documentary film John Lewis: Get In The Way, which tells the story of the courageous civil rights hero, congressional leader and human rights champion, whose unwavering fight for justice spans the past 50 years. In order for the documentary to air on PBS, Bill Woolery, offline editor, had the task of cutting the film down to 54 minutes, taking six minutes out of the original cut and handing off the cut down to AlphaDogs for finishing.

Through never-before-seen interviews shot over 20 years, the film tells the gripping tale of his role in the vanguard of the Civil Rights Movement, including his role in the passage of the Voting Rights Act, which prohibited racial discrimination at the polls.

Director Kathleen Dowdey was inspired to make the documentary after interviewing Lewis more than 20 years ago. “His stories were riveting, his manner so calm and grounded,” she said. “He was at the center of one of the most important chapters in U.S. history. And very, very few people knew who he was.”

Having already worked with AlphaDogs previously, post-production supervisor Aaron Zuber brought the project to the team in preparation for the nationwide broadcast on PBS as part of their Black History Month programming.

Herrianne Catolos, editor at AlphaDogs was in charge of finishing the cut down that included building lower thirds, some light color correction and replacing roughly 40 photos with high-resolution versions using Avid Media Composer. 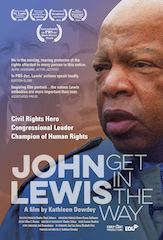 Catolos’s attention to detail and years of experience working on reality shows such as Project Runway proved to be beneficial in delivering to PBS standards under an extremely tight deadline. Of particular importance was smoothing out a cut at a very crucial point in the story where Lewis says his signature line: You must find a way to get in the way.

“I didn’t know a lot about John Lewis prior to working on this project,” said Catolos. “I now have so much respect for him and am very happy to have been part of this project. In light of what our country is going through with the new presidency, this is a great documentary to remind us of how far we’ve come as a nation.”

Sean Williams, AlphaDogs vice president of design was in charge of recreating existing graphics in the same style they were originally created. This included changes to the main title, incorporating additional animated lower thirds, as well as locator IDs that were then handed off to Catolos and edited into the shorter version of the film. Having access to the original After Effects project allowed Williams to match the already established visual style while delivering under the tight time constraints.

Williams said, “The story of John Lewis is fascinating, powerful and deeply resonant. I am truly honored to have played a small role in bringing it to a wider audience.”

AlphaDogs audio engineer Curtis Fritsch completed the audio mix for the promotional trailers while keeping within the required specs required to air on broadcast television. In addition, Fritsch worked collaboratively with audio mixer Jeremy Grody who did the final mix for the film. As a team, they identified which audio would be the most current from the 2015 version and cut that into the new 60-minute version, which saved time and money for the final mix. Voice over recordings for new PBS funders spot was also completed at AlphaDogs prior to final delivery.

“I was extremely pleased with the final delivery,” said Zuber. “AlphaDogs worked within our tight schedule. Everything was handled with extreme efficiency and we were able to get the film looking the way we wanted, while still meeting PBS requirements. The team truly cares about the work they are doing.”

John Lewis: Get In The Way is produced by Early Light Productions. Directed by Kathleen Dowdey and presented by Georgia Public Broadcasting.

John Lewis: Get In The Way http://www.getinthewaymovie.com