The challenge of bringing Marvel's Thor: The Dark World to life involved many creative people working simultaneously in The United States and Australia. Many of the film’s signature creatures were realized by the teams at Luma Pictures in offices in Santa Monica, California and Melbourne, Australia. One particular highlight for this movie was the Stone Man.

The creature, featured prominently in the film's trailers, is a collection of individual stones, held together by complex layering of muscles and collision detection systems. The result is a hulking mass of stone and debris, several layers deep, capable of seamless movement through the opening battle sequence of the film. "This character was intriguing because we were creating an entity made of many smaller rigid elements that must move together without bending, without creating unsightly gaps, or penetrations," said VFX supervisor and vice president, Vince Cirelli.

To create this effect, Luma utilized rigging technology developed for The Destroyer, which allows for layers of metal armor to move in concert with each other without bending or penetrating. They upgraded the rigging system to accommodate hundreds of irregular sized pieces of rock and debris, interacting throughout the volume of the Stone Man during his performance. The many discrete pieces composing the character's face were especially challenging. To give the 'Stone Man' a full range of expressions, a more articulate rigging system was developed to create more subtle movements in the face. 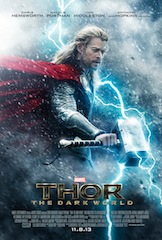 "The facial rig we designed uses an underlying mesh representing a mantle that helps control the smaller discrete rocks," said Cirelli. "This allows the rocks on the surface to interact in a way that really sells the performance."

Luma also brought the mythical Frost Beast to life – a massive dog like creature that rampages through anything in its path. Concept artist Loic Zimmerman added his skill to help retool the original Marvel creature design to work with the storyline. Zimmerman went back to the original concept for inspiration, and reworked the design, added details to the bone structure and musculature in order to allow more details in the animation. The revised design was sculpted using Z-brush, then rigged in Maya using Luma's proprietary rigging and muscle simulation tools.

During the epic final battle between Thor and Malkeith, leader of the Dark Elves, the two warriors are thrust into the Frost Beast's lair on Jotunheim, home of the Frost Giants, through a tear in space. As the two adversaries square off, they inadvertently drag the Frost Beast back Earth where the beast wreaks havoc in the city and takes out some of the Dark Elf army. In addition to the CG Frost Beast, the sequence required the crafting of a variety of digital doubles, a full CG set of the Frost Beast's lair, matte paintings of London, as well as particle and destruction effects to enhance the sequence.

One of the key aspects of the Asgard mythology is the Bifrost, which allows our heroes to move between the different realms under the watchful eye of the warrior Heimdall. On stage, only the main floor and pedestal of the Observatory were constructed.  Marvel tasked Luma with creating the bulk of the space as a Digital set due to the complex movement of the swirling metal rings, which rotate like the intersecting gears of a timepiece, which make up the walls of the room.

Luma tapped into its darker side to bring the ultimate evil, the crimson-black Aether, to the screen. In the film, the Aether flows like a zero gravity liquid, with a haunting and seemingly intelligent purpose. Inspiration came by way of examining the movements of all types of various liquids under different conditions. Ultimately the Aether was created using a customized particle system in Maya, along with creeping fields written by John Cassella. "This allowed us to create something that looks like a viscous, tendril like fluid, while still allowing for a high level of control in order to art direct the simulations as they roll and fold on themselves in a unique way. The resulting particle cloud was meshed in Houdini, then rendered in Arnold," Cassella said.

One of the more breathtaking scenes in Marvel's Thor: The Dark World occurs when a representation of Ygdrassil, the Tree of Life, is revealed as a shimmering, crystalline Ash tree, within whose branches the nine realms are realized. Rendered as pulsating galactic bodies integrated among the foliage, the tree and leaves were created using an l-system in Speedtree,
and the spiral galaxies of the nine realms were produced using particle simulations in Maya, and FumeFX fluids for the glowing nebulae. Using advanced depth cueing techniques Luma was able to bring it all together within a proper 3D volume, with the realms commingled within the leaves of
the tree.

Marvel and VFX Supervisor Jake Morrison also tasked Luma to come up with another unique look for a scene in the Healing Chamber in which physicians employ advanced technology, in the form of a tactile 3D hologram, to scan and heal a person. In this scene, Jane Foster, played by Natalie Portman, is immersed in a swirling field of microscopic scanners that help the healers visualize the evil that has possessed her, much like a virtual MRI scan.

"Jake mentioned wanting to explore nanotechnology to create floating interactive displays. We decided that we could use elements of the set as emission points for millions of particles and then direct them inside a magnetic field," said Luma's executive supervisor and co-founder Payam Shohadai. "The team at Marvel is always pushing boundaries, great to work with, and we've developed a real rapport with Jake. He allowed us a bit of creative license to delve into the concept, and create a really unique visual element in the story."