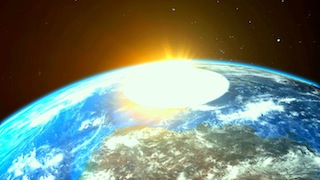 A.K. Strom, director of the upcoming science fiction thriller The Watchers, says that with the latest advances in camera technology and digital effects, it is now possible for even the smallest, low-budget indie films to have realistic CGI and he believes it could revolutionize the industry.

The first teaser trailer for The Watchers shows solar flares striking the earth and giant meteors raining down on the planet. "The revolution in the cost of digital effects is really leveling the playing field," Strom says. "For indies like us it is a dream."

He says The Watchers joins other recent films such as Chronicle (2012), Monsters (2010) and Iron Sky (2012), all with relatively low budgets but also using CGI on a large scale. Chronicle is the most successful of these, with a budget of $12 million and more than $126 million in worldwide box office receipts.

As a first-time feature director, Strom says he has to be very mindful of keeping the indie flavor of his film intact. "What this revolution does is enable us to compete on a certain visual level. But we have to keep the indie realism and the indie sensibility alive," he says. "It is still all about the story and the characters."

Strom says that shooting the movie in New Zealand is also helping greatly. "This place is a scenic wonderland," he says, "And when you are on a budget as tight as we are, you need every advantage you can get. All we can hope is that the CGI and the indie flavor and the New Zealand scenery all add up to bring the best out of what little funding we have."

Strom did not detail the specifics of his budget or the CGI technology he is using. The Watchers is scheduled for release in mid-2014.