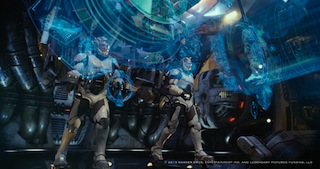 When legions of monstrous creatures, known as Kaiju, started rising from the sea, a war began that would take millions of lives and consume humanity’s resources for years on end. To combat the giant Kaiju, a special type of weapon was devised: massive robots, called Jaegers, which are controlled simultaneously by two pilots whose minds are locked in a neural bridge. But even the Jaegers are proving nearly defenseless in the face of the relentless Kaiju.

On the verge of defeat, the forces defending mankind have no choice but to turn to two unlikely heroes who are teamed to drive a legendary but seemingly obsolete Jaeger from the past. Together, they stand as mankind’s last hope against the mounting apocalypse.

This is the second time the Quebec-based studio has participated on a film directed by the Academy Award-winning director. The project was yet another opportunity for Hybride’s team of artists to showcase their expertise by creating motion graphic animations that serve as key narrative elements to help drive the story forward.

Hybride delivered graphic design content for the holographic projections inside robot (Jaeger) cockpits (Conn-Pods), as well as inside control rooms (Loccents). For the cockpit HUDS (head-up displays), Hybride’s graphic designers were faced with the challenge of creating visual signatures for graphics to help identify each robot’s country of origin, allowing audiences to instantly recognize Jaegers.

To achieve this effect, Hybride’s team of artists created a series of color and graphic styles specific to each country’s robot. For the 2012 and 2023 versions of the American Jaeger, Gypsy Danger, Hybride produced arm grid and hand disk holograms around the pilot suits. The team also designed and created motion graphics for control room monitors and also designed and integrated the holographic television screens and computer monitors seen throughout the film.

“It was great to collaborate with Industrial Light & Magic and a fantastic opportunity to showcase our creative team’s talent as well as the efficiency of our production team,” said Daniel Leduc, VFX producer at Hybride. “Pacific Rim was a wonderful project from start to finish and being surrounded by so much talent helped create a truly collaborative and rewarding work environment.”