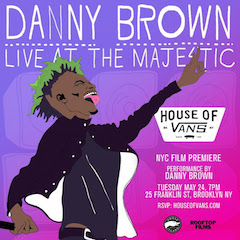 House of Vans, in partnership with Rooftop Films, is bringing two memorable evenings of music and cinema to the House of Vans Brooklyn. Celebrating Rooftop Film’s 20th Annual Summer Series and the on-going House of Vans global expansion, they will bring creativity to life under one roof with the world premiere of Andrew Cohn’s documentary Danny Brown: Live at the Majestic and the New York debut of director Angela Boatwright’s Los Punks: We Are All We Have.

Andrew Cohn’s documentary, Danny Brown: Live at the Majestic, kicks off the premiere week on May 24 and will feature an exclusive performance from the Detroit rapper himself. “I'm excited to premiere something as personal as Live at the Majestic at House of Vans,” said Danny Brown. “I've worked with Vans from Guangzhou to Brooklyn and this is a cool addition to our histories.”

Two days later on May 26, Angela Boatwright will be joined by New York punk band The Casualties and Los Angeles backyard favorites Age of Fear and South Central Riot Squad, for the ultimate celebration of punk as she introduces her film, Los Punks: We Are All We Have. House of Vans will host DIY workshops where guests can stud, patch, bleach and dye just about everything under the sun. Each screening will also offer a Q&A with the attending musicians and directors so guests can interact with the creatives behind each film.

RSVP is now open for both screenings here: http://www.houseofvans.com. 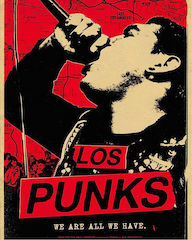 Danny Brown: Live at the Majestic is Andrew Cohn’s new concert documentary featuring the uniquely indie, Detroit rap star. The documentary takes you behind the scenes as the famed rapper prepares to take the stage at the Majestic Theatre in his very own hometown. Like any return to the place you grew up, the journey is filled with hilarious stories of youthful misdeeds, wrestling with a new and more honest assessment of home and a deeper understanding of yourself. What Cohn delivers is both an intimate and poignant conversation with Brown and a wholly entertaining rock doc featuring explosive concert footage.

Angela Boatwright’s profound 2016 Slamdance feature Los Punks: We Are All We Have tells the story of the backyard punk community in South Central and East Los Angeles. Punk rock is thriving in these communities, and the film documents a group of predominantly Latino teens and young adults who cobble together a tight-knit family interwoven into a subculture of thrash, noise and pits. "I lived in New York City for half of my life and after four years in Los Angeles it’s an honor for me to present Los Punks to all of my East Coast friends,” said Boatwright.