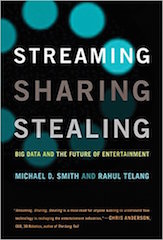 The new book Streaming, Sharing, Stealing: Big Data and the Future of Entertainment, clearly lays out the challenges the Hollywood studios face in the increasingly data-driven digital cinema era they helped create. In their book, the co-authors – Michael D. Smith and Rahul Telang – present ways they believe the studios could address that challenge. The question is: will Hollywood listen?

I recently spoke with Smith about the book and his work. He and Telang are professors of Information Systems, Marketing and Management at Carnegie Mellon University, where they are co-directors of the Initiative for Digital Entertainment Analytics. They have done research projects for many major companies including several of the Hollywood studios, experiences they describe in their book.

Smith said one of the things that surprised him the most when he first worked with a studio was that it was not the monolithic enterprise he’d expected. Instead, he said, “If you asked five people the same question, you’d get twelve different answers.”

In the book, the authors encourage the major Hollywood movie studios to take advantage of data about what makes some movies a success and others a failure. Given his experience working with the studios I asked Smith how realistic it would be for Hollywood to change its ways.

“It will not happen overnight,” he said, “but we believe that things will slowly change. Some of it, because new and younger talent will take senior leadership positions. Some of it will be the pressure on firms and divisions to generate more profits. And, data analytics would be a natural alternative.” 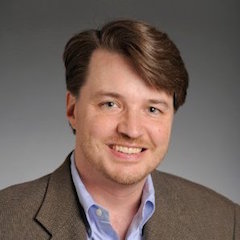 “So yes, there are a lot of hurdles— but as we point out in the book, there are also enormous opportunities. We believe that embracing data-driven marketing and new distribution platforms will not only enhance the bottom line, it will also enhance the creative opportunities available to artists, and will improve the studios’ ability to connect great stories and great storytellers with an audience.”

With the advent of digital cinema and the widespread growth and sophistication of data collection and analysis, most exhibitors now have detailed information about their customers’ preferences concerning a wide range of topics. I asked Smith how sharing some of their customer data benefit exhibitors and studios?

“Our research has shown that seeing a movie in the theaters increases the likelihood that a person will buy the same movie on DVD,” he said. “Because of this, it could be incredibly valuable for the studios to know exactly which customers saw a movie in the theaters and to have the opportunity to promote the movie directly to those customers when it comes out on DVD.”

“There is a sometimes-strained relationship between exhibitors and studios,” he acknowledged, “but they both are under threat from online platforms and the entertainment options users have. A common threat might compel them to cooperate in future. For outsiders it is easy to see that there is an opportunity for a win-win here by sharing data — and good businesspeople should be able to put their differences aside to exploit win-win opportunities.” 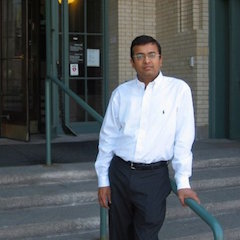 Disney and Universal both have theme parks and gather a lot of data from their visitors. I asked Smith if that gave them any advantage over competing studios. “We recently partnered with a studio to analyze their return on investment from various online advertising strategies,” he said. “Our results showed that the studio got the highest ROI, by far, from targeting consumers they knew had expressed an interest in the product, for example, consumers who had watched the trailer for the movie. The point is that interest and engagement matter far more than demographic characteristics, and by knowing who came to the park and, in Disney’s case, what rides and events they consumed, you can learn a lot about individual interests and engagement. In fact, many theme parks have detailed infrastructure in place to collect and analyze very detailed customer data.”

For years, the studios have lobbied for day and date release of first run movies. In their book, Smith and Telang describe interesting tests of similar ideas that had positive results for the companies involved. I Smith asked if day and date releases could be a plus for exhibitors?

His answer was mixed. “This is a perfect question where data analytics can provide precise answers that are optimal for both exhibitors and studios,” he said. “Given information the exhibitors have about which customers watch particular movies, and given the potential value to the studios from changing the timing of their home entertainment releases, we believe there could be enormous value to both sides from a partnership to share data and intelligently modify release windows.”

The crux of the book, for me, is Smith and Telang’s observation about the critical difference between an individual product business model and a multiple product model. Amazon and Netflix offer multiple products and are constantly looking for more products for the customers they already have. Customers that, thanks to the rich data they constantly harvest and analyze, they know very well.

That’s why, for example, Netflix can afford to offer Adam Sandler a six-figure multiple picture deal when, in all likelihood, the studios might not be so receptive. Netflix not only knows how many of their subscribers like Adam Sandler; they know who they are, where they live, when they’re likely to watch the movie and on what device. And they know how many new subscribers they got or lost after the first Adam Sandler movie ran.

By comparison, the studios operate with an individual product model. Even with sequels and remakes, they are selling one movie at a time, over and over. Every time out the studios need to find customers to buy that one product.

Worse, even if the studios suddenly became convinced about the need for better data, as things stand now, they have very limited access to any. Google will not share what it knows; Amazon and Netflix certainly won’t share their data. Plus, what data the studios can gather is limited to their own content. That doesn’t give them a good picture of the market at large.

Smith said he doesn’t think the studios can compete long term with a single product business model. “Owning the customer has never been more important,” he said.

Nevertheless, Smith’s experience with the Hollywood studios suggests to him that current top executives see no need to change the way they do business. Some of this is generational; some of it is protecting their turf. Smith said he finds it very telling that the Hollywood executives he has worked with don’t even seem to see Amazon or Netflix as a threat to their business. “Netflix’s just television,” one told him. Another dismissively said, “Netflix is just another channel.”

“That’s the culture that needs to change,” said Smith.

(Disclosure: A banner ad for The MIT Press, publishers of Streaming, Sharing, Stealing is currently running on Digital Cinema Report. The advertising was not payment for a positive article. The advertising is in exchange for their permission to run an excerpt from the book, which will be posted later this week.)