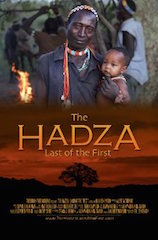 The Hadza: Last of The First chronicles the lives of the Hadzabe tribe of Tanzania, possibly the last true hunter-gatherer group on the planet. The film, to be released digitally by Journeyman Pictures starting today, is directed and produced by Bill Benenson. The Hadza: Last of the First was shown at the United Nations Permanent Forum on Indigenous Issues and is produced in association with The Nature Conservancy, one of the most highly regarded non-profits in the world.

Benenson has produced or executive produced three projects set in Africa. In addition to The Hadza: Last of the First, he is an executive producer on Cary Fukunaga’s acclaimed Beasts of No Nation, distributed by Netflix and Bleecker Street Films and executive produced Mr. Johnson, which starred Pierce Brosnan and was directed by Bruce Beresford.

The Hadza: Last of The First, narrated by Emmy Award-winning actress Alfre Woodard, looks at human origins in Africa's Rift Valley, where the Hadza, one of the last remaining forager groups in the world, have lived sustainably on their land for at least 50,000 years (and possibly as long as humans have inhabited the Rift Valley). The Hadza are among the last people on the planet who have lived continuously as our earliest ancestors did but in the Hadza’s case, they actually also have inhabited the exact place of our collective birth. Oscar winner Lupita Nyong’o Woodard’s co-star in the film 12 Years a Slave, is the film’s Swahili consultant and translator.

"We are honored that Journeyman Pictures is distributing our story of a remarkable, self-sustaining people who can help illuminate our past while teaching us unexpected lessons on how humans can live cooperatively in the future," said Benenson.

"In its clever title, ’The Hadza: Last of the First’ brings mankind face-to-face with where we started and the knowledge and survival instinct we appear to have lost over the millennia,” says Mark Stucke, Journeyman’s managing director.  “How can one of earth's most ancient tribes know more about keeping our planet intact than the many great and modern minds that govern it today?”

“This land is our true home. We can move a few meters, but we can't leave. There is no other place we could go,” a Hadza tribesman explains in the film.  Each morning the men head out armed with spears and bows to hunt down the animals they need to survive. The women dig for roots and plants for their daily consumption. The Hadza are as much a part of the land as the animals they hunt. If they lose their land they lose their means of survival.  But this primitive existence is becoming more and more illusory each day.

The arrival of matches means they're losing their fire-making skills, modern medicine is taking the place of traditional remedies and alcoholism is threatening their peace. Modern civilization is encroaching on their land and ancient traditions are being eroded. The Hadza now risk losing their deep connection to nature.

“If things keep going the way they are, and people continue to come here, we will be finished, gone forever,” says Hadza tribesman Kaunda. The Hadza are fighting to protect their ancestral land, but unless things change they're fighting a losing battle. Agriculture is already depriving them of resources, with cattle drinking from their water holes and even eating the thatch from their roofs.  An insight into their unique way of life, this moving film follows the Hadza as they are caught between traditions and modern ways of life. It uncovers a clash of cultures that could mean the loss of a vital connection to our past.

To view the trailer:  https://www.youtube.com/watch?v=UYF0W9OQdeA