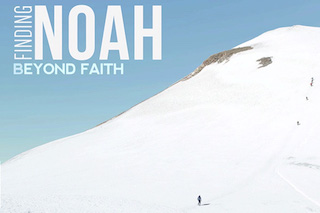 Finding Noah, a new feature documentary releasing from 17K ASL and Alchemy, brings to life an archaeological expedition in search of Noah's Ark. Narrated by Academy Award nominee Gary Sinise, the film follows a team of archaeologists, theologians and explorers as they summit one of the world's most dangerous mountains in a quest to find a highly sought after piece of history.

For thousands of years, mankind has been fascinated by the story of a global flood and one family's dramatic escape in a homemade vessel. Versions of the story appear in almost every culture, but the most well known is the biblical account of Noah found in Genesis.

Historical reports, scientific evidence and biblical accounts point to Mount Ararat, now located in Eastern Turkey, as the Ark's final resting place. Finding Noah examines this evidence in detail, while chronicling the harrowing journey of a team of men in their search for the Ark.

"Noah's Ark is one of history's greatest mysteries, and it is an object of great historical, cultural and spiritual significance," said Brent Baum, the director and producer of Finding Noah. "There was so much evidence leading to Mount Ararat, it seemed irresponsible not to look for it there. Filming the search for Noah's Ark has become one of the most amazing adventures of my life."

Known as Agri Dagh or Painful Mountain, Mount Ararat is located in one of the most volatile geopolitical regions in the world. The Finding Noah expedition had to brave dangerous environmental challenges, deadly rock and ice falls, hidden crevasses, hypoxia and even terrorism in their quest to find the Ark. Finding Noah is not only a chronicle of a scientific mission, but a picture of how far the human spirit will go to achieve a goal.

Finding Noah will be shown October 8 during a one-time event in select U.S. theaters through a partnership with Fathom Events. The event will include the full-length feature, as well as a panel discussion with archeologists, theologians, filmmakers and expedition team members. For more information, visit http://www.fathomevents.com/event/finding-noah.

Finding Noah will be available in all major channels including DVD, Digital, Streaming and church events in early 2016.

"Our partnerships with Fathom and Alchemy give us the opportunity to bring this adventure to audiences nationwide," said Baum. "We are excited to share our journey with the world."