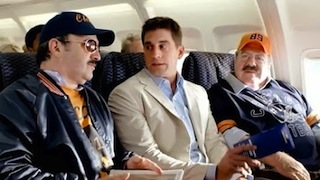 Filmworkers provided post-production services with a distinctive Windy City accent for the latest spot from State Farm. Conceived by Chicago agency DDB, the spot features State Farm spokesman Aaron Rodgers, who finds himself wedged uncomfortably between a pair of Bears fans during an airline flight. The two fans are played by George Wendt and Robert Smigel in a reprise of their roles as Bob and Carl from a classic Saturday Night Live skit. Bob and Carl poke fun at Rodgers as the “discount double check guy” while tending a pair of tray table grills filled with sizzling brats.

State of Turbulence is the latest in a series of State Farm ads to pass through Filmworkers’ post-production pipeline before making their way to air. Colorist Michael Mazur performed final color grading while VFX director Rob Churchill handled visual effects and editorial finishing.

Churchill had a hand in the reappearance of a character from Rodgers’ past spots for State Farm: a roly-poly Cheesehead who mimics the quarterback’s discount double-check hand gesture. In this instance he does so while clinging to the plane’s wing. Churchill composited the actor into the shot and added sky and wind effects to create a sense of over-the-top realism. “DDB comes up with great concepts that consistently challenge us to do our best work,” Churchill says.

Turbulence follows an earlier State Farm ad titled Billboard, where Filmworkers created a cast of some 5000 digital actors. Promoting the company’s new auto loan program, the spot features a pair of bank executives on a rooftop attempt to take down a billboard advertising the program. They are stopped when a huge crowd forms on the street below. 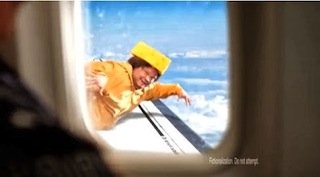 With the exception of a few real actors appearing in close ups, the crowd of gawkers is made up entirely of digital actors, produced by Filmworkers with the crowd-generating software Massive.

“We’ve created crowds before to fill sports stadiums, but this was a much more complex application,” explains Churchill. “We have people looking up, taking pictures with cell phones, talking with other people, fidgeting.  Some walk, some run. They weave around each other…all in a random manner.”