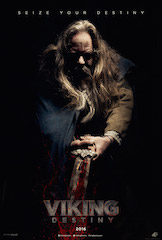 Viking Destiny, an epic odyssey adventure following the lives and legendary crusades of Scandinavian explorers is currently in pre-production and will be introduced at the 2016 Cannes Film Festival by Clay Epstein’s Film Mode Entertainment. David LG Hughes is slated to direct, and will also produce along with Andy Ryder (Alleycats).

“Viking Destiny is a dream come true for the broad fan-base of high-stakes fantasy-adventure films,” said Epstein. “The film’s compelling story combined with an historically colorful setting during an exhilarating point in time will thrill audiences and distributors globally in the same way hit titles like Game of Thrones and 300 appeal to people in virtually every country around the world.”

The film follows the perilous ascension of a beautiful, young Norse girl and rightful heir to the Viking Kingdom. In order to seize her legacy, she must cultivate the predatory instincts of a hellcat and the skills of a ruthless warrior.

"I’d like to think that Viking Destiny is the kind of mythical action-packed adventure story that the Vikings themselves would have told around the campfire,” said Hughes. “And like those stories, it’s timeless, adrenaline-charged and epic. It’s the Gladiator of Viking films for the Hunger Games generation and/or the 300 for Game of Thronesenthusiasts.”

Film Mode Entertainment is handling worldwide rights on Viking Destiny and is presenting the project to distributors in Cannes for the very first time.