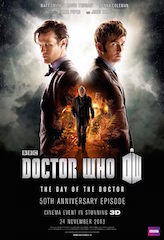 Event cinema will take center stage at CinemaCon April 12th at Caesars Palace in Las Vegas when Fathom Events honors BBC Worldwide North America with its Excellence in Event Cinema Award. The award is for their record-breaking success in global event cinema, featuring the Doctor Who series. The award will be presented by Fathom Events CEO, John Rubey, and accepted by BBC Worldwide executive vice president of franchise and digital enterprises, Soumya Sriraman.

The 50th anniversary Dr. Who special grossed $10.2 million worldwide in its three-day run. Perhaps even more telling, the episode was No. 1 in the U.S. on day three of its run, a Monday, when it brought in $4.7 million at more than 650 sites, selling 320,000 tickets. That made it the second biggest film of the day after The Hunger Games: Catching Fire.

These are revenue numbers that are increasingly difficult for exhibitors to ignore, especially as they look for ways to sustain and grow their businesses on weekdays. And the Dr. Who special is not an exception. Event cinema successes are becoming more common.

The feat took just five days and landed the film ahead of two major studio releases by director Hayao Miyazaki: Howl's Moving Castle ($4.7 million) and The Wind Rises ($5.2 million). During its short run, the film was in the Top 10 overall box office gross numerous times and earned the highest average per screen among all releases on three separate days. 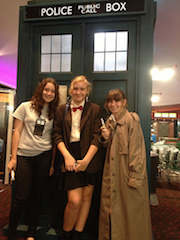 "Dragon Ball Z: Resurrection F has been a phenomenal success for not only Funimation Films but our theatrical partners as well," said Michael DuBoise, executive vice president and COO of Funimation. "We have a talented team and unique relationship with millions of passionate fans. We've demonstrated how the right combination of strategic marketing and targeted outreach plus an outstanding film can deliver record breaking results."

According to an IHS Technology and Rentrak report on the market for 2014, event cinema has experienced double-digit annual growth in Europe and the market should reach $1 billion in annual revenue by 2019, the report said.

“There is still much growth to come in this sector from its current level to our forecasted $1 billion by 2019,” said David Hancock, IHS Technology’s director, film and cinema, “and as the digitization of cinemas comes to an end and the [virtual print fee] financing mechanism system winds down, the true extent of programming flexibility will become apparent. Event cinema has an integral part to play in redefining the cinema experience, assisted by new experience-enhancing technologies.” 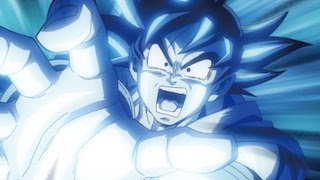 Melissa Cogavin, managing director of the Event Cinema Association said, “The publication of reports like this is vital to enable a young industry to gain credibility and facilitate its growth.” The industry has seen countless world records set and broken in this sector including the Dr Who Day of the Doctor 50th Anniversary episode (BBC Worldwide), the Royal Shakespeare Company’s Richard II (Picturehouse), Billy Elliot The Musical Live (Universal) and One Direction (Arts Alliance).

Additional revenue for exhibitors is only part of the story. Kymberli Frueh, vice president, programming of Fathom Events notes there are other positives. “It’s not just about the ticket sales,” said Frueh. “Look at what kind of audiences we’re bringing back to the theatre. These are people who haven’t been inside a movie theatre in years.”

The ECA’s Cogavin agrees. “Event cinema is a no-brainer. It complements mainstream content, makes dark screens busy at low times of the exhibitors’ week, offers a broader range of entertainment to audiences and crucially the exhibitor has the power to influence the success of the release by the level of local marketing they want to do,” she said. “Of course it’s not an exact science and it takes time to build up a relationship with your audience to the point where they will keep returning. But we have seen countless examples in the US and in Europe where the cinema has become a cultural center in its own right. My advice to those who haven’t tried it yet would be to have an open mind. You have little to lose if the screen is dark anyway; the ECA can advise you on all manner of commercial, technical and content-related issues, introduce you to the people you need to meet.  Be prepared to work in a different way.  Own your space, curate your own material, and make your cinema a go-to entertainment venue in your town.”