Is This Entertainment’s Future? 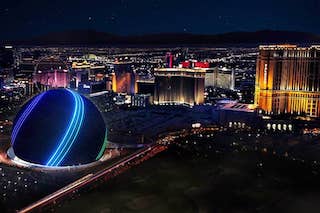 When the MSG Sphere opens in Las Vegas sometime next year, it promises to get even more attention than it has already, which is saying a lot. To date, most of the media coverage has focused on the construction of the massive complex, a story well worth being told. But, while some people have gone so far as to label it the future of entertainment, it’s difficult to understand why, given that to date the people running the sphere have offered few details about what kinds of shows and events it plans to host. And most of the reporting about MSG Sphere has attributed the idea behind it to James Dolan, who is invariably described as the project’s billionaire brainchild. Few, if any of the reports that I’ve seen, have added anything more about the man, which seems like an oversight and, possibly, a serious oversight.

The construction numbers are staggering, even for Las Vegas. When completed, the Sphere is expected to be the largest spherical structure in the world at 336 feet tall and 516 feet wide, and serve as, what one media outlet called “a radical new entertainment venue that can accommodate up to 20,000 [standing] spectators.” The venue will seat 17,500 The Sphere’s dome alone weighs 13,000 tons and has a surface area of 220,000 square feet. The dome uses six million pounds of steel. Construction costs have been estimated in various media outlets at more than $1.8 billion, and the building isn’t completed yet.

It’s expected to house a record 160,000-square-foot wraparound LED display on the interior, while the exterior will be coated with a record 580,000-square-foot of exterior LED display. The LED display can accommodate 16K-by-16K picture resolution. Through a partnership with Berlin-based audio company Holoplot, the Sphere will also house a custom spatial audio system, and additional plans include 4D capabilities from wind to scents, as well as connectivity for all guests. 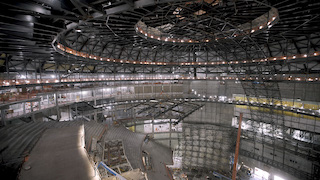 The screen covers an area larger than three football fields. The outside of the Sphere will have about 600,000 square feet of programmable lighting. The venue will use an acoustic system utilizing “beamforming” technology, with 157,000 ultra-directional speakers. The Sphere will also feature an infrasound haptic system enabling audiences to feel the sound.

During a recent public appearance, several people from MSG Sphere Studios — the production arm of the new venture — said they are talking to many people in the entertainment business including Hollywood directors and musicians. But, as has been the case to date, there have been no details released about what their specific entertainment plans might be. What the Sphere means for filmmakers or exhibitors remains unclear.

Andrew Shulkind, is the head of capture for MSG Sphere Studios, a Burbank facility that will house the core production and post-production-work content designed for the Sphere. It has been suggested in many news reports that the content for the multi-purpose venue could include immersive filmed entertainment, live events including concerts, gaming and what they hope will be entirely new types of entertainment. Shulkind confirmed that narrative content is “absolutely on the road map.”

“We are looking for disrupters,” said senior creative director Nathalie van Sasse van Ysselt at the same recent public event. “We have an active creative-development department. We are hosting VIP tours in Burbank and testing these creative tools.” 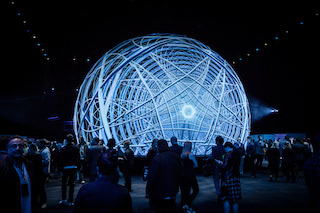 Chris Dee, the studio’s senior vice president of production and show technology, noted that the studio is “focusing on live-action first.” To that end, the team confirmed that they have already placed camera systems — newly developed systems and massive 3D rigs — in Antarctica and plans to place one on the International Space Station, through a grant from The Center for the Advancement of Science in Space. Dee acknowledged the need for innovation in all areas of production, post-production, and exhibition — tools and workflows, all while managing massive amounts of data. “We are building the tools and language,” said Dee.

While designed for immersive entertainment, Shulkind said a portion of the LED sphere could be used to display content at a more traditional aspect ratio — such as Hollywood tentpoles or live events including the Super Bowl. He added no details.

This past March, according to a press release, Lucas Watson, a so-called brand-builder, and former Google executive was selected by the Madison Square Garden Entertainment Corporation to head up MSG Sphere operations in Las Vegas. Watson will be based in Burbank He is coming to MSG from a senior vice president role at Cruise, a self-driving vehicle tech company.

Watson, who also worked as an executive for Procter and Gamble, will oversee the Sphere’s commercial strategy and bookings, among other responsibilities, officials said. He will also work on potential Sphere projects in other cities, the press release said. 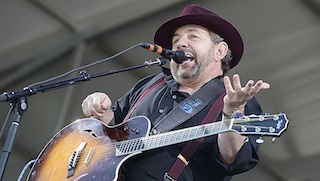 “Throughout my career, I have focused on building world-class brands and scaling emerging companies with disruptive technologies to deliver growth,” Watson said in a statement. “The opportunity to revolutionize entertainment with MSG Sphere is thrilling.”

But what about James Dolan? It’s true that he is in charge of Madison Square Garden, the New York Knicks pro basketball team and the New York Rangers pro hockey team. He has used those entertainment connections to foster the success of the blues band he fronts called JD and the Straight Shot. But his track record in running the Garden and the sports teams is mixed at best. In any event, he built none of it. That was the work of his father, Charles Dolan, 95, a true visionary who created one of the first cable systems in the country and had the foresight to be one of the first people to sign a pro sports team to an exclusive long-term TV contract.

James Dolan has a well-deserved reputation of being thin-skinned and mercurial. He has banned season ticket holders from the Garden who have the audacity to question his decisions. And he has fired top executives in all parts of his company on a whim. For example, the New York Knicks have had fourteen head coaches in the last eight years.

Yet, despite the younger Dolan, and despite all the uncertainty surrounding the Sphere, it seems certain to be a success as a tourist attraction if only for its size and scale. What it ultimately means for the entertainment business remains an open question. Will it be like the New York Rangers who are in the playoffs and currently just seven wins away from hockey’s coveted Stanley Cup? Or will it be like the New York Knicks who last won an NBA championship in 1973? Time will tell.