Enhancing the Horror of Alien Hunger 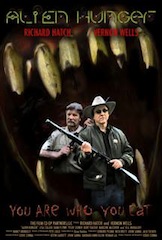 “Due to our shooting schedule, we used multiple cameras, which affected the lighting, making some scenes look very different from others,” said Tucker.  “I needed a post facility that could fix the problems with the lighting and also take the time and interest in getting the look I envisioned, which I why I choose AlphaDogs.”

Starring Richard Hatch (Battlestar Galactica) and Vernon Wells (Road Warrior, Commando) Alien Hunger portrays something that’s “not of this earth” as it terrorizes and feeds on the flesh of campers only yards away from the comforts of the park rangers' home.  The film will screen at various festivals and be available on DVD later this year.

Founder and lead colorist at AlphaDogs, Terence Curren consulted with Tucker and Bhagia reviewing all the footage to get a idea for which direction to go with the choice of color before staring the color-grading process. Curren says, “Colors used in a film can greatly impact the story.  It’s important to determine both the plot and subplots and then decide how you will carve out the story with the subjective manipulation of color. Indie films are particularly fun to work on, as you have more freedom with creative choices and in working one-on-one with the client in creating the overall look of the film.”

Curren’s extensive technical knowledge of Avid systems combined with years of color-grading experience on feature films proved crucial in getting the finish Tucker was looking for. “We were thrilled with what Terence was able to do,” said Tucker.  “The creative choices that were made really brought the story and characters to life, achieving the overall creepy and gruesome vibe I was looking for. We will certainly be back with future projects based on the first-class talent at AlphaDogs, and superior quality of the final project.”