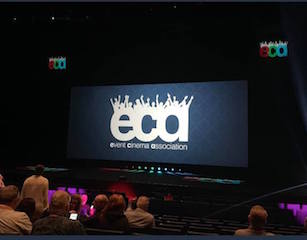 In June 2012 a small disturbance at the fringes of the CCIB convention center in Barcelona announced itself as the Event Cinema Association. There were a few speeches followed by a modest drinks celebration. That little party was the culmination of a few years’ hard graft by a collective of like-minded entrepreneurs, visionaries and artists supported by technical and service providers. All of these people saw that state-of-the-art cinemas recently burdened by hefty virtual print fee agreements could offer so much more than feature films, and the high end content they envisaged deserved a name all to itself: event cinema.

Each year that followed the ECA gradually inched its way into the consciousness of CineEurope and the membership blossomed; panels on the trade show floor, training sessions, seminars, high profile poolside drinks receptions. The trade press lent increasing support and big-name sponsors jostled to applaud the noble initiative of the ECA. Few trade associations from a nil capital injection and a standing start have become as visible on the international film landscape as the ECA in so short a time, and its strong message: promotion of event cinema and supporting the players within it, helped many members to gain traction in this burgeoning sector. The industry and the association grew in profile incrementally, year on year.

Let’s put this in perspective. It’s important to note that event cinema as a sector struggles to be heard among the giant studios at a show like CineEurope due to the small-to-medium enterprises nature of its multitude of providers, despite the household names for whom they distribute. Therefore, sharing the main auditorium alongside the major studios is a significant achievement. Event cinema’s box office share is comparatively miniscule; admissions are lower, its model completely different, its audience hugely diverse. The only way this industry could ever be heard at a trade show at all is collectively, via a mechanism like the ECA, and the support the association received this year was astonishing and well deserved, and shows the recognition event cinema has received by the sector. 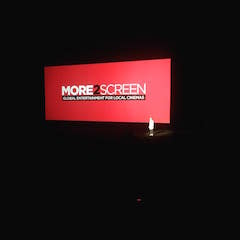 On stage at this year’s event Peat thanked her sponsors and announced the main players, followed by a speech from Vue Entertainment’s Tim Richards, who rather bizarrely took the credit for event cinema’s creation back in the ‘90s. Then it was straight into a slick presentation by one miked up, well-rehearsed distributor after another. Highlights included a welcome return of stand-up comedy in the form of the legendary Billy Connolly (CinemaLive), a documentary and live Q&A of the Dalai Lama (CineEvents/Fathom), a stunning season from the Bolshoi (Pathé Live), a Margaret Atwood event (NT Live), Angela Carter’s Wise Children (More2Screen) and a League of Legends gaming championship in November (Piece of Magic).

Opera is seeing something of a refreshing reinvention of late. There are a number of affectionate, big budget tributes to Placido Domingo, Luciano Pavarotti, Jonas Kaufman and opera trio Il Volo in the form of attractively branded concerts and grainy retrospectives lined up over the coming year. This is in addition to the staples provided by the 2020 opera seasons from the European opera houses and the Met; talk last week returned over and over to the aging event cinema opera-goers and how to engage a younger demographic; it may be that this kind of soft Netflix-style docu-drama introduction is exactly what’s required to attract their attention, then it’s up to the opera houses to retain it.

There is a marked sense of confidence returning to the music industry after a slew of record-breaking successes over the past 12-18 months. Live and recorded pop and rock concerts by Cliff Richard, Muse, Coldplay, BTS, Take That and no doubt Westlife in a couple of weeks will add to this collection. It remains to be seen what market leaders Trafalgar and CinemaLive pull out of the bag in the coming 6-12 months as a result, but expectations are high. Concerts by the Cure, Elvis, Led Zeppelin, Lionel Richie, Melanie Martinez, ZZ Top and impossible-to-categorize André Rieu are already lined up but this writer’s spidey sense suggests some even bigger names are on the horizon for the autumn/winter.

In seven short years the ECA and its members have put event cinema firmly on the program at CineEurope and it remains to be seen what dizzy heights they reach next year. In spite of worrying economic and geo-political challenges and an industry in the throes of technical change, the event cinema sector has proven it remains resilient and robust; small distribution companies are agile, able to adapt to changing fashions fast and capture (or exploit) a mood before most of us have even realized it’s changed (the record-breaking BTS concert by Trafalgar is a case in point). The sense last week is that the event cinema industry is more buoyant than ever and confidence is high; we can therefore expect great things from Grainne, the ECA and event cinema industry, which promises a slate of exceptionally high end, diverse and innovative content over the coming year. It is fair to say in 2019 that event cinema has matured.

Melissa Cogavin is a London-based cinema industry consultant and was the founder of the Event Cinema Association.