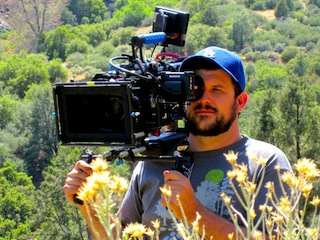 “In the true tradition of independent film, Cold Turkey is a dialogue- and character-driven movie,” explained director of photography Lucas Lee Graham. “We wanted an intimate, personal look with a really shallow depth of field and nice portraiture so that the visual emphasis would be on the characters and what they were doing.”  Graham added that the film also needed to be shot inside an actual home in Pasadena, California, and include minimal lighting and night scenes.

For Graham, the solution to all of these challenges was to shoot Cold Turkey using a Canon EOS 5D Mark III Digital SLR camera along with an assortment of Canon EF L-Series prime and zoom lenses.

“The codec on the Canon EOS 5D Mark III camera is a great asset” Graham continued. “Its ALL-I edit-friendly intra-frame compression really cleans up the image, especially when you start transcoding it, so that’s a big deal. We experienced hardly any moiré patterns with this camera, unless you are shooting a checkered shirt or something really extreme. Also important is the fact that the Canon 5D Mark III camera outputs 1080 or 720 from its HDMI port to your monitor when you’re recording, so you can check for critical focus. You don’t have to wait for playback to be sure that the shot is sharp. This definitely makes it more comfortable to use on a feature with high-caliber actors, because you know that your focus will be sharp, and you can shoot quickly and efficiently.”

The body of the Canon EOS 5D Mark III Digital SLR weighs less than two pounds and the camera features a selectable ISO range of up to 25,600 when capturing video. These capabilities, Graham said, were crucial, as they provided him with the high mobility and exceptional low-light imaging he needed to depict what he described as a “nostalgic” story filmed principally inside “a Brady Bunch-looking house.”

“Nostalgia plays a big part in this film, whether it’s about something that really happened in the past or just something we created in our mind,” Graham said. “Quite frankly, we chose the Canon EOS 5D Mark III camera because we liked the images we were getting from it. At the end of the day, the images either look good or they don’t. We kept finding that the images from the Canon 5D Mark III camera looked great and worked for our story. The skin tones were really nice.”

Another factor Graham cited as contributing to his ability to photograph Cold Turkey in the low-light style he sought were the Canon L-Series prime and zoom lenses he used. The Canon EOS 5D Mark III camera is compatible with Canon’s line of more than 60 interchangeable EF Series photographic lenses (including primes, zooms, telephoto, and such specialty lenses as macro, tilt/shift, and fisheye models) and Canon EF-mount Cinema EOS prime and zoom lenses.

“Every one of those lenses made it onto our Canon EOS 5D Mark III camera at some point,” Graham said. “We primarily shot close-ups on the 135mm and 85mm primes. For wide and medium shots the 24mm and 35mm primes tended to be used for most of the movie.”

Canon zoom lenses Graham used on Cold Turkey included the EF 24-105mm f/4L IS USM and EF 17-40mm f/4L USM ultra-wide zoom. “Our Steadicam footage all used the 24-105mm zooms,” he said. “Anytime I’m on Steadicam – if I can get a camera with a Canon EF mount – that’s generally the lens that I use. It cuts really well with any other lenses that you may be using, and you don’t have to rebalance every time you want to just swap lenses.”

Graham found that the combined low-light capabilities of the Canon EOS 5D Mark III Digital SLR camera and the Canon L-Series prime and zoom lenses enabled him to use fewer and smaller lighting instruments than would ordinarily be needed for such a film. This not only provided the look he sought for Cold Turkey, it also increased his ability to place his camera where he wanted it, and to make his actors more relaxed.

“It’s nice not to need lighting right on top of the actors,” he noted. “We even were able to take advantage of some of the available lighting in the house. Also, instead of having to hang units, we were able to replace regular light bulbs with photofloods, which really made the whole process much easier. I think the biggest lights we used on the entire show were 2 to 2.5 HMI’s. It’s pretty amazing to be able to shoot an entire feature – with night scenes – and have those as the biggest heads you have to carry.”

Graham’s Canon 5D Mark III Digital SLR camera was mounted in a “cage” for the most part during the filming of Cold Turkey. The rig integrated a shoulder mount, matte box, follow-focus knob, extended eyepiece, LCD monitor, audio transmitter, and other items. The camera came out of the cage, however, to maximize its lightweight portability when a scene needed to be filmed in a moving car. Graham mounted the 5D Mark III camera on the hood, or simply held it while sitting in the passenger’s seat. “Car shots are normally a nightmare, requiring an expensive insert trailer, police assistance, and all that goes with that,” he said. “But the Canon EOS 5D Mark III Digital SLR camera enables you to push a high-production-value car look into the independent filmmaking world. This camera gives you a lot for its price, and any time you can save money on hard costs – such as the camera – it’s great. That money can instead go toward production design and what the audience sees up on the screen.”

“Another great thing about the Canon EOS 5D Mark III HD-SLR camera is its headphone jack, which is very helpful for smaller projects where you might not always have a sound person with you,” Graham added. “You can put a little shotgun mic on the camera, monitor it with the headphone jack, and know the sort of sound you’re getting.”

“I feel comfortable taking my Canon 5D Mark III camera out anywhere,” said Graham, it’s very liberating, and the reliability factor of the Canon brand is huge. This camera speaks to where technology has gone in that – as a young cinematographer without a super-established reputation – it provided me with the confidence to shoot high-caliber actors. I can sleep well at night knowing that the camera is performing, the actors look good, and I will have a ‘real film’ in the end.”