Dolby Vision to Launch with Disney’s Tomorrowland, Disney•Pixar’s Inside Out 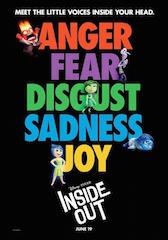 Dolby Laboratories and The Walt Disney Studios today announced that Disney’s Tomorrowland, in theatres May 22 and Disney•Pixar’s Inside Out, in theatres June 19, 2015, will be the first Dolby Vision titles to be shown at Dolby Cinema locations around the globe. In addition, Disney’s The Jungle Book, which was due out April 15, is also being presented in Dolby Vision, with more titles to be announced.

Dolby Cinema, featuring Dolby Vision and Dolby Atmos, is a premium cinema offering for exhibitors and moviegoers that combines spectacular image and sound technologies with inspired design to make every visit a completely captivating cinematic event.

“Dolby is thrilled to collaborate with Disney and Pixar to push the cinematic boundaries through the powerful combination of Dolby Vision and Dolby Atmos,” said Kevin Yeaman, president and CEO, Dolby Laboratories. “Dolby Cinema delivers an unforgettable cinema experience that transports moviegoers into the heart of the action.”

“The Dolby Cinema experience is a very exciting prospect for both filmmakers and film fans,” said Brad Bird, director of Tomorrowland. “Dolby has been so vital to the advancement of cinema sound, it makes complete sense for them to turn their attention to enhancing and improving the quality of motion picture images as well. Our team was delighted to collaborate with Dolby, and we are proud that Tomorrowland is the first film to be presented in their stellar new Dolby Vision process. The brightness and clarity of the images, yet with richness and detail in the blacks—Wow. The picture quality, especially in 4K laser projection, is nothing short of stunning.”

“Our studio and our filmmakers put so much into creating high-quality, immersive experiences for audiences, and that includes using the latest, cutting-edge technology to enhance the stories we tell,” said Dave Hollis, executive vice president, theatrical distribution, The Walt Disney Studios. “Disney has been a longtime collaborator of Dolby, and we’re excited for the continued storytelling possibilities that technologies like Dolby Cinema deliver.”