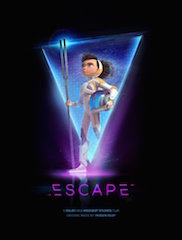 Dolby’s short animated film Escape, a sequel to two-time Daytime Emmy Award-winning short Silent, premiered last week at the Tribeca Film Festival in New York. Chosen for the Tribeca short film category out of a record number of 4,38 submissions, Escape is the story of a lone space explorer who crash-lands on a desolate planet and must find a way to make her new home habitable.

“The film is a cinematic poem about the world-changing power of invention and is a fitting sequel to Silent in which our character experienced the evolution of film technology from the silent-film era to the present day,” said Vince Voron, the film’s executive producer and vice president and executive creative director of Dolby Laboratories. “We have been investing in original branded content to inspire our consumers, filmmakers and partners and celebrate the powerful storytelling possibilities when art and science come together.”

Dolby united the creative talents of Emmy winning director Limbert Fabian and Academy Award winning co-director Brandon Oldenburg, who represent the creative leadership of the newly formed Flight School Studio, with the musical talents of Imogen Heap, the only solo recording artist and also the first woman to win a Grammy for engineering. In addition, Dolby’s Angus McGilpin and Vince Voron, the team behind Silent, collaborated to bring visual design and audio expertise to Escape.

Combining techniques such as miniatures and animation with the spectacular imaging of Dolby Vision and the moving audio of Dolby Atmos, Escape invites the audience to experience a joyous vision of the future. With her love of technology and her passion for the project, the Heap composed, performed and produced the song Magic Me for the film. Heap added her amazing voice and music to an original soundtrack, working alongside BAFTA winning sound designer Nick Ryan to mesh the sound fx into the music, creating a truly unique listening experience to complement the animation. Heap will release Magic Me in conjunction with the film’s premiere.

“This was the first time I’d written a piece of work for an animation,” said Heap. “I was inspired by the challenge to craft a song with locked picture combined with Dolby Atmos, where the elements on screen become the fabric of the music. The crystals give rise to the melody and key, lava sparks become the tempo, the cave becomes the reverb, the monster, the tension and the struggle for our heroine shape the musical dynamics.”

To create the beautiful and dynamic world, the team developed a model of the planet’s landscape that was designed to combine purposeful structures with organic, vine-like elements in a way that permitted light to flow throughout the space. The film avoids dialogue and instead uses facial expressions, visual effects and music to communicate with a global audience, making sound an integral part of the movie experience.

Escape is now available to view online via YouTube.