Dogs Get Their Day in Taiwanese Premiere 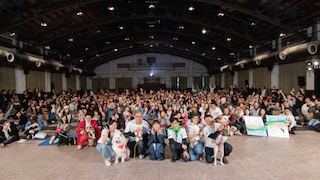 More than one hundred dog owners and their pets from all over Taiwan recently converged on Songshan Cultural and Creative Park for a charity premiere of the Hollywood film, A Dog’s Way Home. The film chronicles the heart-warming adventure of Bella, a dog who embarks on an epic 400-mile journey home after she is separated from her beloved human.

Organized by film distributor A Really Happy Film and Taiwan Dr. Dog Program, the premiere screening was powered by a Christie CP2320-RGB projector, installed by Christie Taiwanese partner Dacoms Technology, who also served as the official technology partner for this special event.

The historic multi-showcase exhibition hall – formerly a basketball court where Taiwan’s most renowned basketball teams used to train – was transformed into a movie theatre equipped with a 10-meter screen, complete with floor mats and fluffy cushions.

“We’re very pleased to be part of this charity premiere, during which we deployed Christie’s next-generation direct-coupled RGB pure laser projector to deliver the most vibrant and realistic visuals to the audiences and their pet dogs,” said Emily Hong, president, Dacoms Technology. “I’m also proud to note that this is the first-ever movie screening in Taiwan specially organized for dog lovers and their pets. The advent of RGB laser projection technology has created new prospects for film exhibition. With its compact all-in-one footprint without the need for external cooling, Christie RealLaser projectors can be deployed beyond conventional cinema environments, and yet offer audiences with projected visuals that are as stunning as what’s offered in movie theatres.”

Han Kim, senior director, Asia Pacific cinema sales, Christie said, “I’m delighted that our CP2320-RGB RealLaser cinema projector was deployed for the charity screening of A Dog’s Way Home, which mesmerized audiences with bright and dynamic visuals. At the same time, I’m heartened that our partner Dacoms had taken part in this meaningful event, and demonstrating the impeccable image quality and performance that Christie RealLaser cinema projectors can offer at venues beyond conventional movie theatres, which opens up new frontiers for RGB laser projection.”