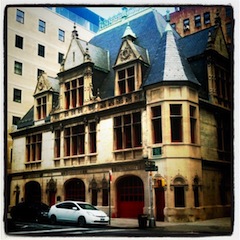 For more than four decades the Downtown Community Center in Lower Manhattan has been a vital resource for training and nurturing independent filmmakers, in particular documentary filmmakers. For most of that time DCTV has called a landmarked 1896 firehouse home. The center reached a significant milestone recently, as the funding is finally in place for a new theatre there that one DCTV executive called “the last piece of the puzzle.”

Founded in 1972 by husband and wife filmmakers Jon Alpert and Keiko Tsuno, the nonprofit DCTV has grown into one of the leading documentary film education and production centers in the country, providing resources for thousands of filmmakers and students, including equipment and facility rentals, screenings, master classes, post-production services and educational programs. DCTV’s film and television work has been recognized with 15 National Emmy Awards, three DuPont-Columbia Awards, two Academy Award Nominations, a Peabody Award, six New York Emmy Awards and many other accolades at film festivals and competitions around the world.

When completed in 2015, its new 73 seat, fully interactive, digital cinema will provide a dedicated venue specifically for documentaries in New York City, and will provide theatrical runs to non-fiction filmmakers for Academy Award qualification. The theater, designed by Lee H. Skolnick Architecture + Design Partnership will boast a 3D and 4K digital cinema projection system, and the ability to share live events with millions of people around the world via the Internet.

I emailed Alpert to interview him about the new theatre but he begged off saying that he was on his way to Havana, Cuba for a project. “Talk to Catherine,” he said.

Catherine Martinez is DCTV’s managing director. Martinez manages DCTV finances and handles grant applications and human resources. There are fifteen fulltime employees and five regular part-time people. “We have an ongoing workshop for the public,” she said, which works with about a thousand people a year. Another program works with 200 inner-city kids each year. Still another program is more intensive and works with 45 people. “They can stay for a year,” she said. All of the programs are free.

One goal of DCTV is to nurture young people and help them get through high school and, ideally, get into college. All of the technology has become more accessible and much higher quality. “The camera technology has improved dramatically,” she said.  The same is true of editing workflows.

The challenge, Martinez said, is to teach students how to use that technology effectively. “The ultimate goal is to get people to listen,” she said. “You have to be able to do it well. You can create this beautiful picture but what if the sound is bad?”

Each year, she said, “One or two documentaries get picked for distribution to a wider audience. One of the key goals of the new theatre is to change that. There’s so many more out there that deserve attention.” 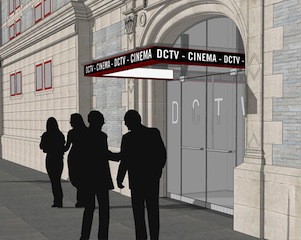 The renovation is not likely to cause major upheaval to DCTV’s daily operation, Martinez said. The theatre is being built in a largely unused first-floor space that was in all likelihood a stable. The room has a window that looks out onto White Street. There is evidence that the window was originally a door. Nevertheless, that DCTV was able to get the approval of the city’s Landmark Commission to change the window back into a door was a major hurdle. That door will eventually be the entrance to the theatre and will have a marquee. The new theatre will operate seven days a week and DCTV will host a regular screening series.

At the groundbreaking ceremony Alpert said, “New York City is the worldwide capital for documentary filmmaking. We have more documentarians per square inch than any place on the globe. For people who love docs, this is their home. This theater is a place that celebrates their work. The entire doc community has put their shoulder behind this project,” adding that since documentary directors are often a solitary bunch, “there isn’t often an opportunity for us all to work collectively.”

Furthermore, the interactivity of the theater will allow anyone in the world to participate in the discussions that take place in the screening room. “We’re trying to cast a very wide net,” said Alpert. “This is a place where the tech measures up to the quality of the work. There aren’t as many fine theatrical settings as there should be for documentaries and this is one attempt to rectify that.”