David Attenborough’s Conquest of the Skies Nominated for BAFTA 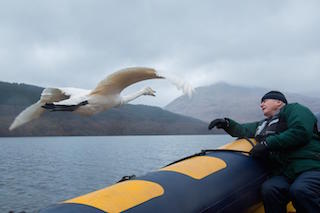 The spellbinding visual account of how flying animals evolved into the familiar species we see today, became a reality in the stunning documentary series David Attenborough’s Conquest of the Skies. Attenborough said of the project, “The story of evolutionary flight is one I’ve always wanted to tell. It’s our most ambitious yet.”

The series was produced by Atlantic Productions with the help of SGO’s Mistika technology at Onsight. As well as winning a 2014 BAFTA, the landmark series was recently nominated for a British Academy Television Craft Award for Special, Visual & Graphic Effects. The results will be announced at the ceremony in London on April 26.

The award-winning post division at Onsight used Mistika once again on its seventh Attenborough project for Colossus Productions, which depicted complex flight skills with creative ingenuity. Formats used included 4K, HD, 3D and 2D including a bespoke 4K workflow design built by the Onsight Post division. After also providing R&D and camera solutions for the project, the facility worked with massive amounts of data amounting to approximately 50 terrabytes and a variety of camera formats such as Red Epic. In post, Onsight provided plate preparations, DI, VFX, conform, QC, mastering and deliverables in 3D and 2D across its numerous high-tech suites at its London facility. This included the ability to screen 4K masters, combining 5K live action with 4K VFX and CGI.

Onsight's senior colorist Andy Lee benefited from Mistika's real-time speed and flexibility, which enabled him to freely alternate between the color and depth grades, as well as the VFX conform. Furthermore, Mistika's wide spectrum of grading toolsets equipped him with a vivid and colorful array to enhance the remarkable features of winged creatures ranging from birds to butterflies, with eye-catching colour.  In addition, he graded subtle tones to convey the changing landscapes filmed in places such as Ecuador to the grey palettes of Scottish skies.

Lee has graded many of the award-winning Attenborough projects from Atlantic and Colossus Productions.  He said, “Mistika allows me to work with ease across multiple formats, frame sizes and deliverables.  David Attenborough’s Conquest of the Skies is an example of one of our extensive and innovative projects in 3D and 2D, which requires that level of flexibility, benefiting us and the production team.”  VFX Stereo Artist Miguel Camaño Riveiro supported the project with stereo corrections and compositing work.

Anthony Geffen, producer and CEO of Atlantic Productions said, “Conquest of the Skies builds on all the storytelling and technology that we have been developing on these programs with David over the last 5 years. Onsight has played an integral role in this journey, creating solutions and delivering our productions, using SGO Mistika, to the highest standard.”

Previous Attenborough productions in collaboration with Atlantic Productions and Sky that also involved Mistika include David Attenborough’s Natural History Museum Alive and Flying Monsters, both of which have won the BAFTA for Specialist Factual, as well as acclaimed Micro Monsters, Galapagos, Kingdom of Plants and The Bachelor King.