Danna Kinsky Captures the Possibilities of Burning Man with her iPhone 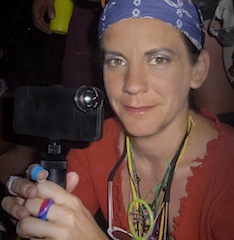 This year, when cinematographer Danna Kinsky made her pilgrimage to Black Rock City for the Burning Man festival, she took something new with her — the iPro Lens System from Schneider Optics for her iPhone. “By altering ordinary reality through environment, art and community, Burning Man provides unique conditions for healing, growth and liberation,” Kinsky explains. “Burning Man without a camera is like the desert without sand. This visual spectacle is better remembered when even if your photos can’t come close to expressing the ‘collective effervescence’ you were feeling in the moment.”

Kinsky says that the iPro lenses allowed her to capture the event in a very different way than she has before. “It’s my fifth time,” she says. “I shot a film with my Panasonic DVX 100A during my first year in 2005, but the dust has a way of penetrating everything. At the end of the day, I ended up paying a few hundred dollars just to have the camera properly cleaned. So I was worried about using my Nikon, Canon or Lumix as well.”

That is why she tried her new iPhone 5, outfitted with the iPro Lens System. “My birthday present was the iPro Lens kit,” she says. “I immediately fell in love with it. Everyone these days takes photos with iPhones. You always have it on you and you always end up using it to take shots that otherwise you would not have taken because you didn’t have a DSLR camera with you. The iPhone’s built-in lens is limiting for those of us who are used to real nice glass.”

“The iPro add-on lenses make me feel that my still and video images have an extra something,” she adds. “The images have the opportunity to capture just a little more than those someone else took while right next to me shooting with their iPhone. It also provides me with a toolset that I previously didn’t have, which for me, sparks creativity. I see an object or person or moment I want to photograph. But, instead of having one choice of how to do it, I now have four different lens options. And, I don’t have to spend the time in post to make the images be more appealing.”

The iPro/iPhone package was Kinsky’s perfect solution. It is small, compact, and fit on her belt, in her pocket or in the small compartment in her Camelbak. She appreciates that the entire lens family fits in a tiny sealed holder that keeps the never-ending desert dust out. “The resolution of the photos is great and the optical quality is fine for my everyday needs at Burning Man,” she says. “It was really relaxing not to have to worry about messing up expensive lenses and cameras. The images aren’t as fancy as those with high-end cameras and tripods, but I get something invaluable: comfort, convenience and shots that I am content with.”

Each lens gave Kinsky exactly what she needed. “I personally feel that the zoom feature on the iPhone is bad,” she says. “The way I see it, it creates more noise to zoom in than to take the photo wide and crop into it later. The cropping tool was my only option.” But at Burning Man, her solution was to “use the panorama feature of the iPhone 5 along with my Tele 2X iPro Lens to create panoramas that are ‘zoomed’ in optically,” she continues. “This lens gave me a new freedom to be able to document from afar, but still be closer optically. It’s my favorite lens out of the pack. It created far better photographs of the art at Burning Man than shooting without it and cropping later.”

“The wide lens can give a GoPro feel, and the Fisheye is great for when you want to tell a story within the form on the image,” she says. “Now I can satisfy my urge for instant gratification using the iPro Lens instead of using my fisheye Lomography camera.”

The Macro lens, which, along with the other lenses, fits safely into the tiny protective case, traveled with Kinsky although she didn’t use it as much at this event as she has for her own art project she’s currently working on. “It provides more of an artistic close up look at things in front of you,” she explains.

To Kinsky, Burning Man is more than a week in the desert or a reunion in the middle of nowhere. It’s a way of life. A way of “being in the world. It’s a conscious choice,” she says. “Tens of thousands of people travel to the event, which is inclusive of all people. Everyone has his or her own experience there. The iPro lenses allowed me to document this so beautifully and bring the gifting, self-reliance, self-expression, civic engagement and all the other Burning Man principles back to inspire me and everyone around until the next Burning Man event.”