McGinley said, “The most important thing was getting the look we wanted with color and contrast. Terry was in tune with the DP and myself to achieve consistency with tone and mood and in getting the look we desired.” A 25-year veteran in the industry, Curren was able to accomplish this with his many years of experience using color-correction to add to the storytelling. In addition, shooting in 5K can be so unforgiving, many of the actors’ faces needed beautification.  This was accomplished by utilizing the Boris FX Beauty Studio plug-in to smooth out some of the issues that show in the extreme clarity of 5K.

In Danger Diva, McGinley (award-winning filmmaker of Jimmy Zip/Shredder Orpheus), audiences are taken on a journey into the near future with hard rock singer Devi Danger as she is coerced into becoming an electronically enhanced new-music diva. Her singing voice is used to control and energize the brains of indoctrinated employees (also known as Brain Cattle) that are being used as external processors for the advancement of corporate high tech clients. Operating in a digital sweatshop, these Brain Cattle process binary algorithms that serve as a chorus for Devi Danger. Devi is played by the indomitable Molly Sides, lead singer of the all girl grunge/pop band, Thunderpussy. 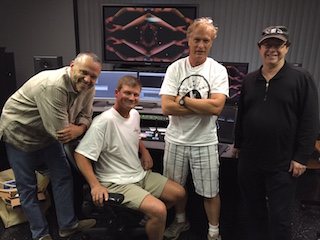 McGinley’s influences for the film came mainly from cyberpunk literature and films. In particular, William Gibson’s Neuromancer and the science-fiction classic, Blade Runner. Also inspired by the Ella Fitzgerald Is it live, or is it Memorex commercial, Danger Diva explores the conflict between high tech vs. high touch, and what it means to be human in a digitally enhanced bio-tech future. Music anchors these themes with an eclectic rocking score with songs by Seattle-based rock band Thunderpussy and composer Regan Remy.

McGinley said, “In the midst of this rock ‘n roll saga, the audience will have an opportunity ponder future technology nightmares like the use of enslaved human brains as external hard drive processors, or employing human offspring as vehicles for life extension.”

AlphaDogs vice president of design, Sean Williams headed up the graphics and VFX that included composition of a car into a new background, fixing monitor insert shots and creating the opening and end titles. Williams primary design and compositing tool was Adobe After Effects with work on many of the shots being done before color-correction had been completed. “I prefer to work on shots that have been color-corrected, but this was not the case with the workflow on Danger Diva, said Wiliams. “This did not slow things down, as I was able to work with the ungraded shots and swap them out later with the color-corrected version and re-render with minimal adjustments. Having color and VFX under the same roof makes these sort of quick collaborations very easy.”

Danger Diva editor, Howard Flaer, suggested AlphaDogs as the place to accomplish the many demanding goals of this visually complex feature film. McGinley said, “I was extremely pleased with the final delivery.  The AlphaDogs’ approach to post-production comes with care and clarity. The team was a one-stop-shop for color correction and VFX with great meticulous work. I would highly recommend their services.”