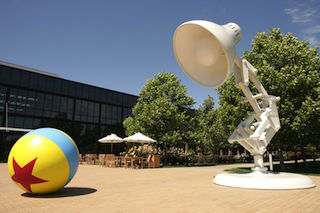 Cooke Optics TV, the educational website containing interviews with some of the world’s most renowned cinematographers and filmmakers, recently travelled to Pixar Animation Studios to discuss animation and cinematography with some of its top creative talent.

Les Zellan, chairman of Cooke Optics, and Cooke Optics TV’s producers, Kieran Chauhan and Bipin Anand of production company ImageNova, visited Pixar’s animation studios in California to film exclusive content on the making of its latest production, Onward (2020), and to gain an insight into the art and technology behind these most beloved animated films.

Chauhan said, “We were thrilled to be invited to film inside Pixar and to speak with several of the studio’s cinematographers, including those who worked on Toy Story 3 and 4, The Incredibles, Cars, Up, Inside Out and Onward, among others. Pixar is influenced by real life camera and lighting techniques that are used in live action films, which allows the audience to connect with their stories in the same way that you would with a live action film. In the new videos on Cooke Optics TV, they break down how they produced their work on some of these movies as well as discussing the evolution of cinematography at Pixar over the years.”

In recent years, Pixar has modelled virtual lenses on real-world lenses, including Cooke S4/i and Anamorphic/i lenses which enabled them to recreate the Cooke Look in an animated environment.

Zellan said, “It was a great pleasure to discuss cinematography techniques with the Pixar team, and an honor to know they have been influenced by Cooke lenses. We are grateful that they took the time to share their knowledge and experience with Cooke Optics TV, which in turn will help educate and inspire other film makers.”