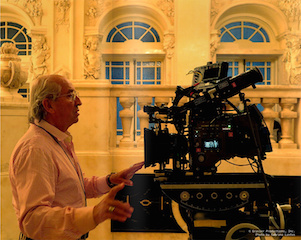 Cooke Optics has introduced its second front Anamorphic/i zoom lens, the 45-405mm zoom. In addition, the 35-140mm Anamorphic/i wide angle zoom is expected to start shipping over the summer. The 45-405mm T4.5-22, front Anamorphic/i zoom lens has preliminary specifications featuring 9x zoom front anamorphic, 5’10” MOD from image plane and 3’11” close focus from the front of the lens. True to Cooke style, the color and contrast will match the rest of the series.

The new Cooke 35-140mm Anamorphic/i zoom on display is a true, front anamorphic with oval bokeh throughout zoom and focus. The patented optical design brings together a unique combination of attributes that allows shooting from very wide angle to telephoto with a 4x zoom ratio and 2x anamorphic squeeze. With T3.1-22 aperture, and 90° rotation of iris scale, the color and depth of field characteristics are matched to the existing Anamorphic/i primes.

Cinematographers have chosen Cooke lenses since the dawn of the filmmaking era due to their speed, precision and the unmistakable Cooke Look. Vittorio Storaro ASC AIC, who recently worked alongside Woody Allen on his new film Café Society, opening at the Cannes Film Festival, expressed this sentiment explicitly.

Speaking of his experience using the S4/i prime lenses on the shoot Storaro said, “To me, Cooke is the one because Cooke built their lenses for cinema. Other companies usually use photographic lenses, rehoused for use with cinema cameras. We needed serious lenses to record the plastic movement of light on the face, for example, from maximum brightness to the maximum darkness, the penumbra, as Leonardo called it."