Cloudy With a Chance of Meatballs 2 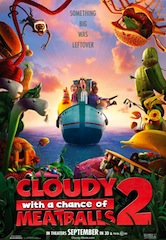 Cloudy With a Chance of Meatballs 2 is what you would end up with if you combined the wacky sensibility of Bullwinkle, the vibrant colors of Yellow Submarine, and the strange creatures of Jurassic Park.  This is a wacky adventure that’s a whole lot of fun for everyone. The younger kids will be charmed by the non-stop motion; older kids will get the juvenile humor (I’m gonna cut the cheese) and adults will love the visual and verbal puns (There’s a leek in my boat).  This is animation on Red Bull, a movie that just keeps heading somewhere, anywhere, elsewhere, whereverand carries everyone along. Susheep, shrimpanzees, watermelophants, peanut butter and jellyfish, tacodiles, and bananostriches – among lots of other characters – work their way through a landscape that has all the color of folk art created by a painter whose mind was altered and style influenced by reality-warping drugs but in a good way. There are morals in here, but they come as fast and as furious as the rapid-fire jokes and crazy observations.  Everyone is always doing something, saying something, observing something that is absurd – and funny.  Oh, you will be laughing.