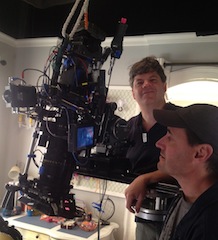 The Mindy Project brings the misadventures in romance of a young OBGyn, Mindy Laheri (played by show creator Mindy Kaling) and her comical observations on life and love in the big city to television. Cinematographer Marco Fargnoli relies on OConnor 2575’s for support on the Fox Network program.

“We shoot with two Alexa cameras on the OConnor heads, using a Panavision 19-90 and 11-1 zoom lens,” he says. “Alexa is simply the best all-around camera on the market. Adding the Panavision zooms, especially the 11-1, helps us achieve the tone and feel of the classic ‘80s-‘90s era romantic comedies that we pay homage to in the show.

“The Mindy Project is at its heart a feature romantic-comedy squeezed into a half-hour single-camera show,” he explains. “The biggest challenge each week is how to shoot an ambitious 22-minute feature style film on a five-day schedule. The writers love to throw lots of large set pieces into the mix (dance clubs, big parties, prison riots, underground rap battles, triathlons). Another challenge is style. The current trend in comedy has been a kind of hand-held casual, but we’ve got a dolly-based classical beauty look to pull off – with the added challenge of cross-covering most set-ups to successfully capture the often improvised comedy dialogue.”

Fargnoli, a big fan of OConnor equipment, says that the 2575’s have been invaluable to the production. “Our show relies on fast and efficient camera set-ups,” he says. “Lots of planks and dance floor, cameras on zooms and Microforces on rock & roll handles. The ergonomics and beautiful fluidity of the 2575 allows us to quickly get all our coverage, re-sizing on the fly, adapting to the adlibs, and still look like a rock-solid classic movie.”

“A fun blocking motif of the show appears frequently in scenes that finds Mindy laying ‘tragically’ posed on the floor after an emotional experience,” he explains. “This translates into quite a few scenes looking straight down on her. The strength and dependability of the OConnor’s counterbalance and thoughtful placement of controls means our operators can easily dial in the sweet spot.

“Without a second thought, we can tilt full over to look straight down with our hefty 11-1 zooms and be ready almost immediately,” he adds. “We’ve mounted it at 90 degrees for overhead shots, and even upside down for a quick solve when we needed an ultra-low-angle setup. Every time, I’ve relied on its solid engineering to get the shot and I’ve never been disappointed.”

Fargnoli says he’s been using OConnor for his entire shooting career from no-budget indies to short films, cable comedies, and now network shows. He came through the ranks of assisting and operating, and has worked with OConnor for over 20 years in the most extreme conditions from freezing cold to dust storms and blasting sun to water spray. That’s why OConnor was his first choice for this series.

“They are dependable and durable. The 2575 would handle anything we could ask of it, and we’ve never once had an issue,” he says. “The design and manufacturing standards of the OConnor gear has made them the industry leader for a reason. Camera bodies get returned, lenses get swapped out, lights replaced. But our 2575’s keep marching on. The ergonomics are well conceived and thought out – and that translates to speed on the set. And, their performance is always smooth and graceful, even with bulky/heavy camera and lens configurations.”