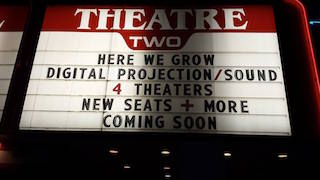 After years of working for Disney, when Jeff Brein undertook the challenge of renovating Seattle’s historic Admiral Theatre, he committed himself to creating the best movie going experience possible. At the time the work started he said, “Everything we will be doing as a part of this renovation is designed to create a superior viewing experience and facility that while functionally modern, respects viewer comfort and the historical character of the theater.”

Digital Cinema Report: According to your website, you formerly worked at Disney and moved to Bainbridge Island off the coast of Seattle in the ‘90s. There you started a public relations business and in 1997 renovated Bainbridge Cinemas at the Pavilion. Today the movie theatre has five screens. Anything to add to that brief description?

Jeff Brien: Actually, Bainbridge Cinemas was a new build that opened in 1998. Far Away Entertainment operates nine locations [with] 31 screens in various configurations: multiplexes and art houses. Now all [are] first run. We are one of the largest independent circuits in the State of Washington.

DCR: When did you first make the transition to digital?

JB: We began our digital transition in the summer of 2012 and rolled out other locations in the fall of 2012. We added three to the Varsity Theater in February of this year.

DCR: Are any of those screens 3D? JB: We have a single 3D screen and Bainbridge, Stanwood and the Varsity Theater and plan to install an additional one at the Admiral as part of our on-going renovation.

DCR: You recently installed NEC NC1100L laser projectors in your Admiral Theatre, in West Seattle. How many did you install?

JB: We installed two with an additional two planned for our conversion from two screens to four screens by late this year or early in 2016.

DCR: How big are your screens?

JB: The two screens at the Admiral are both 15-feet by 32-feet and both have laser projection.

DCR: What was the appeal of laser projection for you?

JB: Better image. Brighter for 3D and not having to worry about bulb changes and the costs associated with this. Additionally, we were able to eliminate the outside heat venting system and their fan units. [That represents] another cost/maintenance savings over time.

JB: We have been with NEC from the beginning of our transition to digital and have been pleased with the quality of these units, on-screen presentation and what we consider to be superb customer service from all levels within the company. Additionally, the cost difference between the NC1100L versus what we would have ordered in non-laser was not that significant when you consider the added value of the presentation and cost savings as noted above. It also gives us a marketing advantage. Laser projection is new enough to be appealing to general consumers.

DCR: How did you finance the purchase of the projector?

JB: All of our equipment has been financed through NEC Financial. Fair rates, painless, quick, easy and efficient. We have even used them for other non-projector equipment in some of our theatres.

DCR: How, if at all, have your customers responded to laser projection?

JB: Our theatre staff reports that people have definitely noticed and commented on the difference. We promoted these and got the projectors on screen on a Wednesday. I received an email from a guest who saw Jurassic World on Tuesday (thinking he was watching laser) and complained. I sent him back the next day and he wrote:

“I was able to stop by the theater today and, yes, the digital projection was vastly better than the film version of Jurassic World I saw on what was its last day in that format. Much better brightness, contrast, resolution and the image filled the screen top to bottom. I’ve long been a fan of film, as well as analogue in the audio world, but perhaps your projector was ready to retire, and I wonder how carefully the studios are now making film prints in what was likely a movie shot, edited and distributed digitally.”

DCR: How involved was making the switch from traditional lamp projection? Was there a learning curve for you and your staff regarding operating the NC1100L?

JB: I was the decision maker in the process and consulted with our sales team at NEC directly. It has been pretty seamless so far and the learning curve is basically no different from our smaller NEC projectors. I’m anxious to see how the 3D image looks once we install that system in the fall.

DCR: Today, you and your partners operate nine theatres in the greater Seattle region with a total of 29 screens, the most recent of which is the Historic Admiral Theatre in West Seattle. How many of the screens have laser projection?

DCR: Will you eventually switch to all laser projection?

JB: I think as other projectors require replacement, depending on how things go at the Admiral, I certainly think that it’s probable that we’ll go all laser. We don’t have the budget to replace currently operating projectors with laser but, from now on, with any expansion our top priority will be laser.