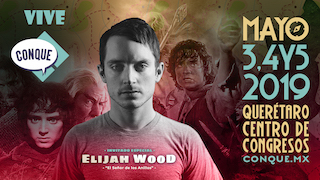 Christie was the projection partner at Conque 2019, Mexico’s biggest comics and entertainment event, for the second year running. Held recently at the Congress Centre in the city of Querétaro, the event’s main auditorium featured a Christie CP4325-RBG pure laser projector.

The convention attracted more than 35,000 people and this year’s special guest star was Elijah Wood, celebrated for his role in The Lord of the Rings trilogy based on the novels by J. R. R. Tolkien. And the exclusive premiere of the film Tolkien was one of the event’s main attractions, which was screened with the Christie projector like all the other presentations held at the convention.

Luis Gantús, managing director of Conque said, “In 2018, the relationship between Conque and Christie ran very smoothly and all the projections at the event went extraordinarily well. Not to mention the fantastic professionalism and seriousness of the Christie team. It is crucial for us to have the best possible projection on screen, because our public is very demanding.”

Alfredo Bortot, Conque’s head of motion design added, “This year we decided to go one step further and opt for RGB pure laser projection because Conque always wants to be at the forefront with the latest technology. And the truth is that the result was incredible; the brightness and quality of image really wowed our audience. All the feedback we received tells us that they were delighted to see the contents they were interested in with such high quality.”

Ernesto Armus, general manager, cinema sales, Christie said, “Because of the success of last year’s event and the satisfaction of the distributors, Christie projection set a new benchmark at Conque. We are really pleased to have taken part once again in this event in the knowledge that our RGB pure laser projectors delivered the flawless cinema-quality image and performance that festivals and events are looking for.”