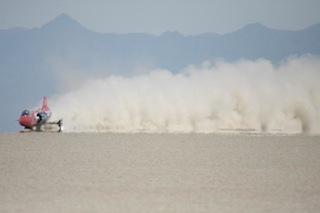 Paul Rees, an experienced still photographer for globally respected advertising agencies and magazines, relied on his instincts as he transitioned to digital cinema to document the North American Eagle Project, a joint U.S.-Canadian initiative to challenge the world land speed record (763 mph, or Mach 1.02) for rocket-powered automobiles. Rees’ camera of choice for this task was the Canon EOS C300 digital cinema camera. He turned to the EOS C300 after other cameras malfunctioned in the extreme temperatures and dusty environment of Oregon’s Alvord Dry Lake Bed, a 12-mile-long salt flat where rocket-powered cars have broken the sound barrier.

“When I am looking through a camera and capturing a definitive moment, it doesn’t really matter if it’s a still or a moving image when I press that shutter,” Rees said. “In terms of lighting, composition, and visual impact, the process is very similar. Throughout my still-photography career, I have used complex lighting set-ups, jibs, dollies, and other film-oriented equipment. Sound, however, was an element I never needed to consider. While the transition into motion pictures is a natural progression for the still photographer, the need to keep sound in mind was a learning experience.”

The subject of Rees’ documentary is the brainchild of veteran engineer Ed Shadle, who has spent the past 13 years building the North American Eagle, essentially a wingless 1950’s Lockheed F-104A Starfighter jet plane on wheels. Shadle (who is also the car’s driver), his collaborators and sponsors seek to break the world land speed record, which has been held by a British team since 1999. 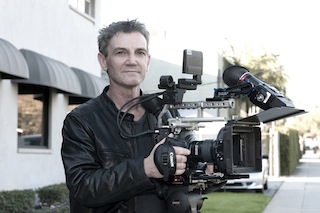 “It is such an intriguing subject, in terms of perseverance and human endeavor – Ed Shadle’s endless pursuit of the seemingly impossible dream,” Rees said. “I saw this as a great story that I just had to get involved with.”

In order to document the North American Eagle Project, Rees’ first challenge was to find a digital cinema camera that was ergonomically similar to the Canon EOS 5D Mark II digital SLR camera he prefers for still photography, and that would also perform well in the harsh environment of the Alvord Desert. “One of the other cameras I tried was heavy and encumbered with bolt-on attachments,” Rees said. “The Canon EOS C300, however, felt great in my hands. It has a similar feel to the classic Mamiya 645 or, more recently, the Hasselblad H3D, and the EOS C300 camera weighs just over three pounds, so they are all similar in weight. Plus, I am familiar with Canon EF lenses from my EOS 5D Mark II camera. We used Canon EF 24-70mm standard zoom lenses and 70-200mm telephoto zoom lenses on the three Canon EOS C300 EF-mount cameras we had. I also used a Canon 100mm f/2.8 macro lens to shoot cutaways of a small lizard. Canon lenses are razor-sharp, fast, and lightweight. They enable you to hand-hold the EOS C300 camera, and – incredibly – we managed to hand-hold the EOS C300 with it attached to a portable mini-gyro.”

Heat posed a major challenge for shooting in the desert. Temperatures there ranged from more than 100-degrees Fahrenheit during one of Rees’ shooting days, to 28-degrees with a chilly wind six weeks later. “This desert is coated with alkali dust and a couple of the other cinema cameras I used took in dust through their air intakes and overheated,” Rees said. Canon’s proprietary cooling design for the Super 35mm CMOS Imaging Sensor in the EOS C300 camera features a sealed duct system that is isolated from other internal parts of the camera. This prevents incoming air from spreading dust or foreign matter through the interior of the camera body. The design also includes a super-quiet fan to avoid problems during in-camera audio recording. 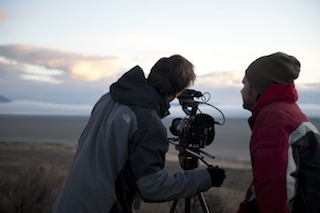 “I was very impressed with the silent running of the EOS C300 camera,” Rees said. “We shot a scene inside a church where it was deathly quiet and very hot. The sound guy’s microphone picked up fan noise from one of the other cameras we used, but not when we used the EOS C300 camera.”

Camped-out in high desert where temperatures can plummet after sundown, the crew built a bonfire one night that provided Rees with the opportunity to document the camaraderie of the North American Eagle Project’s team members. Rees credits what he calls the “incredible” low-light imaging capabilities of the EOS C300 digital cinema camera with his success in capturing this defining scene. The proprietary Canon Super 35mm CMOS Sensor in the EOS C300 camera is engineered to deliver full 1920 x 1080 HD images. Combined with its sophisticated Canon DIGIC DV III Image Processor and a 50 Mbps 4:2:2 MPEG-2 codec, the EOS C300 camera provides a selectable ISO range up to 20,000. 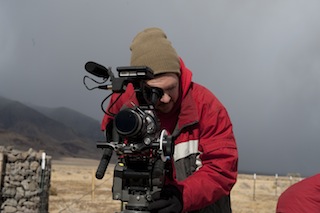 “We shot the crew sitting around a bonfire in the dark, lit only with the ambient firelight at 6400 ISO, and the footage is virtually grain/noise-free,” Rees explained. “We used no supplemental lighting because we didn’t want it to look artificial. Their faces were illuminated with the patterns of constantly dancing flames. It looks real because it is real. We started shooting at 3200 ISO and went to 6400 as dusk turned to dark.”

“I prefer to rely on the EVF because of my background in stills, and the EVF diopter is adjustable plus or minus three,” Rees said. “The rubber eye cup seals out any stray light and all technical information can be hidden, leaving you free to go into your own visual world. The LCD pop-up screen was useful in the helicopter. My assistant cameraman turned it toward his seat to direct the pilot while I concentrated on looking through the EVF to compose my shots.”

The removable LCD monitor can also display a waveform monitor, vectorscope, and other screens for fine-tuning picture quality.

“Another thing that’s great about the EOS C300 camera is how you can alter its aperture very quickly and dial-in six extra stops of Neutral Density (ND),” Rees added. “With some cameras you have to physically insert ND filters into the separately attached matte box. The EOS C300 camera has built-in ND – up to six stops – an absolute lifesaver. I had a shot where it was below zero and snowing in the desert but still with plenty of sunshine. I was able to quickly dial-in four stops of ND with cold hands. With all the will in the world my cold hands would not have allowed me to insert 4x5 ND’s in the matte box. The shot just would not have happened.”

In post-production, the EOS C300 camera employs the industry-standard MXF (Material eXchange Format) for smooth workflow compatibility. The EOS C300 camera can be set to record in Canon Log, a gamma setting that is provided with the camera at no extra cost, and helps to ensure capture of the full 12 T-stop exposure latitude of which the camera is capable. This image-data capacity provides the film-style dynamic range between shadows and highlights that is essential for achieving cinematic subtleties in post-production color correction.

“Canon Log is great, the images look like RAW images, and even though they’re not they are about as adjustable as a RAW image,” Rees concluded. “Nothing is lost from shadow to highlight. This affords you a lot of flexibility in post. The Canon EOS C300 is an incredible camera, and I would say it should be the go-to camera for documentarians and/or still photographers wishing to make that transition.”