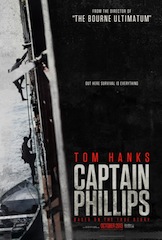 Tom Hanks' new movie Captain Phillips is a contest of frayed nerves, a trial of raw courage, a game without rules or rationality.  “It was supposed to be easy,” the leader of the Somali pirates says at one point. “I take ship. Nobody gets hurt.” It wasn’t easy; before it ended some were hurt, several were killed.  And it’s all based on a true incident that happened in the spring of 2009, 145 miles off the Somali coast.  An experienced filmmaker has the ability to hold you in suspense, even when you know the story – and director Paul Greengrass shows that ability here. This event was heavily covered by the news, but no matter. Your palms will be sweating, your heart will be racing; you will forget that you really do know what happens. Screenwriter Billy Ray (he wrote The Hunger Games) knows how to develop characters and turn them loose, and here he creates two worthy adversaries.  As Muse, self-appointed leader of the pirates, Barkhad Abdi is without acting experience, but his performance is unrestrained and unsettling.  As Phillips, Hanks earns our empathy from the beginning, but he saves his finest work for the end of the movie in a scene involving Danielle Albert, a real Navy corpsman whose matter-of-fact performance calms Hanks and breaks him down in ways he hasn’t allowed himself for days.  He’s shaking – and so will you be.  This is a great adventure story told on a human scale, ripped from very recent headlines, right for today’s audiences. You’ll hear the names Hanks and Abdi again at Oscar time.