Bling Digital Offers a Vision for Post On Demand 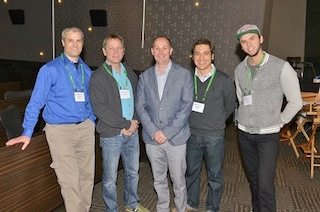 An overflow crowd of producers, directors, cinematographers, DITs and other pros witnessed a spirited panel discussion on emerging workflow technologies at the recent Digital Days Conference and Expo in Vancouver. Bling Digital hosted the event. Titled The New World of Post is P.O.D. the panel described how film and television productions are using new, highly mobile digital tools to save time, boost productivity and reduce costs.

Anderson began the session by reviewing how motion picture and television workflows have changed as productions have moved from film to digital cinematography. “In the days of film, a lot of time and labor were required to get projects through post production,” Anderson told the crowd. “Today, time and costs have been considerably reduced. Productions can be much more efficient. Tools and job functions are changing, and productions who’ve adapted are reaping the benefits.”

Bling Digital has been a catalyst for change by developing solutions to help productions take advantage of the time and cost saving benefits that digital technologies provide. The company’s Post On Demand systems are modular and portable toolkits that allow productions to carry out, on set or near set, a variety of tasks, such as dailies processing, editing and color correction, that formerly required complex infrastructures or outside suppliers.

Digital workflows are not only less costly and more efficient; they can be tailored to the needs of individual productions. “Film workflows were very regimented,” Anderson said. “Now, the workflow is whatever you need it to be. There isn’t just one way to do it; there are a hundred. We design workflows based on the production’s budget, timeline, personnel, what people are expecting to see at each stage of production and many other factors.”

Following Anderson’s presentation, the panelists described digital workflows used by such shows as Psych, Suits and Hell on Wheels. Jacobson pointed out that Bling Digital was one of the first companies to specialize in digital workflow and post-production services and, as part of The Sim Group, is able to offer productions fully integrated solutions from camera through final delivery.

Jacobson noted that having early access, through Sim, to new camera systems gives Bling a leg up on other post-production services providers. “We’re six months ahead of the curve,” he said. “When we test new cameras, we run the format through the whole pipeline to see how it affects each link in the chain.”

Judging by the flurry of questions, the topic of workflow management resonated with those in attendance. “It was a wonderful opportunity to educate people about solutions that are available now and others that are on the way,” said Anderson. “We are grateful to Locals 669 and 891, and the Directors Guild of Canada for letting us have this discussion. To the extent that it sparked new ideas, taught people something new or increased their technical expertise it was a big success.”