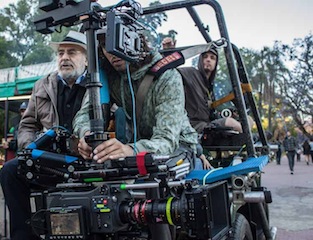 Angénieux will unveil a new line of mid-budget zoom lenses at the National Association of Broadcasters convention in Las Vegas next week. The company says the move was prompted by the proliferation of 4K digital screens and the advent of Ultra definition television that are escalating the demands for high quality motion picture content. A vast spectrum of new generation digital 35mm cameras has become available, and these are being deployed in numerous production environments encompassing movies, dramas, commercials, concerts and live sports events.

The new lenses, descended from the Optimo line, take into consideration the industry’s most stringent requirements for ergonomics and versatility for live TV recording. Angénieux plans to make the first deliveries of the new lens line this summer.

Meanwhile, the legacy Optimo DP 30-80 and Optimo DP 16-42, respectively introduced in 2008 and 2009, will be devoted exclusively to the Angenieux special 3D package.

Finally, as promised at last year’s NAB convention, Angénieux has delivered the first 56-152 2S anamorphic zooms to customers in the United States, Asia and Europe. That zoom is now meeting production needs for cinematographers and DPs who want to give a dimensional character to their images in feature films, commercials, sports and cultural events, music videos and TV production.

Their testimonials clarify their positive reactions:

Cinematographer Gustavo Biazzi, who shot Hugo Santiago’s Le Ciel du Centaure/El Cielo del Centauro, the first feature film entirely made with the Angenieux Optimo Anamorphic 56-152 2S zoom lens said, “With the aspect we wanted for the film, our first requirement was to have anamorphic lenses. Then, in analyzing the storyboard Hugo had put down on paper, where he described all the shots in the film precisely, we realized we needed a zoom. In addition to simplifying the production with its versatility and cost, we needed to combine the physical camera movements with optical movements of the zoom to get a wide variation of shots within a take. And because of that variation we were looking for, the zoom’s minimum focusing distance of 0.63m was indispensable. Visually, the colorimetry is the remarkable characteristic of this zoom. It faithfully reproduced the nuances of tone that are there in reality. Mechanically, it’s exceptional – in situations where you change focus suddenly, the lens never ‘breathes’. And obviously its lower weight and bulkiness differentiate it from other anamorphic zooms, which gives it great versatility.”

Director of Photography Charles Brosius, who utilized the Angénieux Optimo Anamorphic 56-152 2S for Fox Sports, said, “For the Super Bowl, I shot the entire game from the field on the sidelines with a Red Epic and delivered the 5k anamorphic footage to Fox Sports for their promo and production departments. Recently in Las Vegas, Fox Sports asked me to shoot and edit at the PAC12 Basketball tournament. The footage that I shot on the 56-152 was used in both promos and music videos during the broadcast on Fox. My experience using this lens was excellent. I am putting the lens to the test in some of the most fast-paced, chaotic and high profile sporting events in the world. For me it is very important to be able to rely on my equipment and also be able to create a certain style and look that I am happy with and that maintains a high level that my clients are accustomed to. The Angenieux anamorphic zoom does everything I need and gives me a cinematic crystal clear image that is brand new to the sports television world. With this lens I am able to create groundbreaking images and push the limits of what is possible during live nationally televised network events. It would be my lens of choice for all of my future work.”

Brosius’ PAC12 Basketball tournament footage can be viewed on https://vimeo.com/89811586.