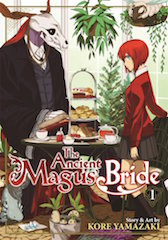 Coming off the heels of a successful inaugural Anime Movie Night screening event this spring, Crunchyroll, which calls itself the destination for anime and manga, working with Screenvision Media and Kaos Connect, will screen the first three episodes of The Ancient Magus’ Bride, a series adapted from the wildly popular manga of the same name.

Fans in attendance will have the opportunity to screen the episodes months before they air in Japan, as well as never-before-seen content before the screening. At the screenings, fans will be able to enjoy the exclusive theatrical release of the show on the big screen for its nationwide debut, and before it is made available on the Crunchyroll platform.

The Ancient Magus’ Bride has been long awaited by fans who made the Ova prequel episodes of the series some of the most popular content on the Crunchyroll platform. The beautifully animated series follows heroine Hatori Chise, whose life is forever changed when she fatefully encounters a stranger with the head of a beast, wielding strange powers. The series has incredible veteran talent attached, and is produced by fan-favorite Wit Studio, the animation studio who brought blockbuster anime hit Attack on Titan to the masses.

“Our first screening was a resounding success,” said Kun Gao, general manager of Crunchyroll. “The overwhelmingly positive response to the first screening validates what we’ve always known to be true at Crunchyroll—that our community is hungry for ways to interact with one another and their favorite content outside of their personal devices. We can’t wait to fill theaters around the country once again with like-minded fans to celebrate quality anime and the community that surrounds it. We’re grateful to our partners Screenvision Media and Kaos for helping to make that vision a reality for the second time, with the screening of The Ancient Magus’ Bride.”

“Crunchyroll’s community is passionate, and they really showed up for our inaugural Anime Movie Night event,” said Dan Diamond, managing partner of Kaos Connect. “This series exemplifies what makes event cinema so magical—it provides an opportunity for a community of fans to connect in-person around the premium content that they love with an exclusive viewing experience. We look forward to the next installment.”