AlphaDogs Gets the Details Right for Kennedy Documentary 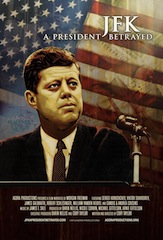 “Ask not what your country can do for you—ask what you can do for your country,” is by far one of the most recognizable quotes of the 20th century. Although it’s been 50 years since John F. Kennedy's assassination shocked the nation, he still remains one of the most memorable presidents of our time. In the documentary JFK: A President Betrayed, filmmakers Cory Taylor and Darin Nellis shed new light on the pressures Kennedy faced during his presidency at the height of the Cold War. The film finished post-production at Burbank-based AlphaDogs.

Without asserting liberal or conservative political agendas, the documentary focuses primarily on Kennedy’s leadership style and his quest for peace and also presents new facts about events that transpired during Kennedy’s fewer than 1000 days in office.

During the initial meeting with the filmmakers, AlphaDogs editor and colorist Sean Stack reviewed the technical requirements for delivery along with the varied video formats and aspect ratios in the edit timeline to determine a suitable workflow for the project. Taylor said, “It was a relief to work with a team that brings a personal touch and interest to the project. The facility has a serious yet relaxed atmosphere that’s neither impersonal or factory-like.”

Taylor said, “This was such a relief as post-production often carries its own stresses and it was nice to work in a comfortable environment with people who give your project their full attention.” Once the workflow was established, Stack then focused on setting the tone for the film.  The process began by completing a first pass on color correction to not only determine problem color areas, but to also view how the images play on the screen to get a feel for the story. A key scene in JFK shows classified documents being sifted through in a dark library revealing new facts and information about events transpiring during the time of the Kennedy administration.

Stack said, “This is where I found the look for what I wanted to do with the color grading by making the choice to surround subjects in the film with more shadows in the background, making them appear brighter in the foreground. In JFK it was important to not oversell the color work, but instead create a consistent look and feel to the story overall.”

Extremely pleased with the final color delivery, Taylor said, “Sean is a talented and hard-working colorist. Certain images that previously lacked luster literally popped from the screen after Sean finished the color grading. This was particularly gratifying because we didn't think it was possible to get as much out of those images as he did.”

While creative choices of color play an extremely important role in storytelling, often there are other elements in post-production that require creative solutions. In the lock picture of JFK there was an original clip of a nighttime exterior shot of the White House where the American flag was seen flying at half-staff in which director Taylor was concerned that it would be inappropriate, but didn’t have any other options. 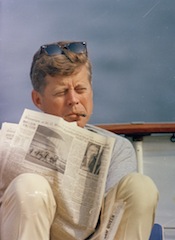 “The one night we had a permit to film B roll of the White House just happened to fall on a day when the president had ordered flags to half-staff,” said Taylor. “Since this is a sacred tradition for honoring the fallen, we felt it would be disrespectful to use it in the film.”  In post-production, Stack was able to set the flag to full-staff by isolating and masking off the flag within the scene, making it possible to move the stars and stripes to the top of the frame. Elements were then added to complete the missing section of the flagpole along with careful shading around the seams making it undetectable to the viewer that the waving flag had been moved from its original position. “It might seem counterproductive to work so hard to have your work go unnoticed. It’s part of the creative process, coming up with solutions in post that get the desired look the client has for the project,” said Stack.

Extra time and attention were given to the details of the sound design due to the historical nature of the film. AlphaDogs audio engineer Curtis Fritsch brought archival footage to life using the extensive sound library available at the facility, taking time to carefully select specific sounds conducive to the environment and time period.  Fritsch said, “It’s important to use historically accurate sounds. For instance, the camera flashbulbs of that time period have a very different sound and feel than present day cameras. Although a bit more time-consuming it was imperative that I conduct proper research to ensure the sounds used were as close to authentic as possible.”

Extra care was taken to ensure that there would be no distractions from Morgan Freeman’s distinctive narration by background noises. Fritsch used the Izotope RX Declicker to remove small nuances, such as the rustling of pages and the acoustics of areas with breathy vocal quality.  Taylor said, “This attention to detail is one of the things that makes AlphaDogs such an exceptional post facility. Curtis is an inspired and adept mixer with a great ear. We recently had the pleasure of screening the film at a high-end studio theater and the audio mix was outstanding. We would absolutely use AlphaDogs again for future projects as the team is professional, courteous, attentive and highly-qualified.”

The film will premiere Thursday, November 7 on DirecTV's Audience Channel for the documentary series Something To Talk About and will have theatrical screenings across the US.

To watch the trailer http://www.jfkapresidentbetrayed.org