The National Association of Theatre Owners will honor John D. Loeks, chairman of Studio C, with the 2019 NATO Marquee Award during this year’s CinemaCon, according to the conference’s managing director Mitch Neuhauser. CinemaCon, the official convention of NATO, will be held April 1-4, 2019 at Caesars Palace in Las Vegas.

Dolby Laboratories congratulates this year’s Academy Award nominees who have tapped into the audio-visual power of Dolby technologies to draw audiences into their stories. Five of the eight Best Picture nominees this year used both Dolby Vision and Dolby Atmos. And all five films nominated for Sound Mixing and Sound Editing awards this year were presented in Dolby Atmos.

The Motion Picture Sound Editors association has announced nominees for the 66th Annual MPSE Golden Reel Awards. Nominees represent the work of the world’s most talented sound artists and their contributions to the past year’s most outstanding feature film, television, animation and computer entertainment productions. 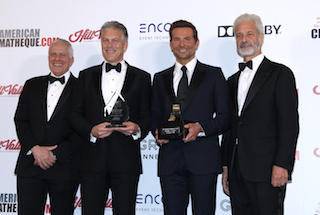 Doug Darrow, senior vice president of the Cinema Group accepted the award on behalf of Dolby.

The not-for-profit independent trade organization Cinema Technology Community recently announced the recipients of its awards at its annual awards ceremony in London.

The Motion Picture Sound Editor will honor Antoine Fuqua with its annual Filmmaker Award. The director of such films as The Equalizer (1 & 2), The Magnificent Seven, Southpaw and Training Day, is being recognized for his outstanding contributions to the art of cinema. He will receive the award at the 66th MPSE Golden Reel Awards ceremony February 17th in Los Angeles.

The Society of Camera Operators will present Lifetime Achievement Awards to Governors Award recipient, Jane Fonda and President’s Award recipient, Harrison Ford on January 26, 2019 at the Lowes Hollywood hotel. The society is presenting the Lifetime Achievement awards for their extraordinary body of work and collaboration and commitment to the art and craft of camera operating.

The Broadcast Film Critics Association and the Broadcast Television Journalists Association have announced the nominees for the third annual Critics’ Choice Documentary Awards. The winners will be presented their awards at a gala event November 10 at BRIC in Brooklyn, New York. The film Free Solo leads this year with six nominations and one honor, including Best Documentary, Jimmy Chin and Elizabeth Chai Vasarhelyi for Best Directors, Best Sports Documentary, Most Innovative Documentary, Best Cinematography, Best Editing and a Most Compelling Living Subject of a Documentary honor for Alex Honnold.