Colorflow recently applied its color grading expertise to a newly restored version of Black Angel, a fantasy-themed short film with a Star Wars connection that was believed lost for more than 30 years.

Filmworkers provided post-production services with a distinctive Windy City accent for the latest spot from State Farm. Conceived by Chicago agency DDB, the spot features State Farm spokesman Aaron Rodgers, who finds himself wedged uncomfortably between a pair of Bears fans during an airline flight.

Technicolor-PostWorks New York provided post-production services to five films that screened at this month’s Toronto International Film Festival. They included three narrative films, John Turturro’s Fading Gigolo, David Frankel’s One Chance, and Ned Benson’s The Disappearance of Eleanor Rigby: Him and Her, as well as Alex Gibney’s documentary The Armstrong Lie, and The Weinstein Company’s concert film 12.12.12: The Concert for Sandy Relief. 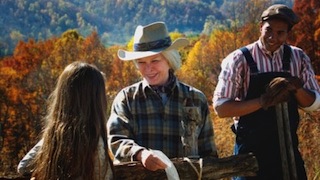 Final post-production work for the independent drama Wish You Well was recently completed at Technicolor-PostWorks in New York. Directed by Darnell Martin, the film is based on the best-selling novel by David Baldacci, who also wrote the screenplay. Set in the 1940s, it is the story of a young girl, Lou Cardinal, who goes to live with her great-grandmother in Virginia after her writer father is killed in a car accident.

One solution to a common challenge of independent filmmaking is to use multiple cameras to ensure scene coverage – especially of action scenes – to ideally save time and money. Unfortunately, because camera manufacturer settings vary, the end result can be contrasting images depending on which camera is used. This was the case with the new action sci-fi thriller Alien Hunger. Producer Jack Tucker, and editor Nancy Brindley Bhagia, had concerns in how the “horror look” would be created in the film due to lighting issues within some of the footage.