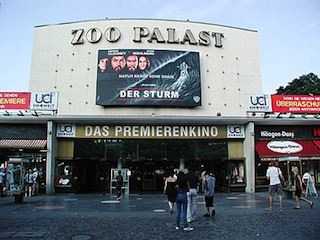 AAM’s Screenwriter Theatre Management System will be installed on all seven screens at the Zoo Palast in order to manage content, playlists and scheduling across the complex. The Zoo Palast has been closed for the past two years in order to undergo extensive renovation, and will reopen on November 27 with a total of 1650 seats, including the 850-seat main screen. The Zoo Palast’s sister site, the Astor Film Lounge, will also use Screenwriter to manage its screen, as the two sites will be networked together, allowing the software to operate across the two locations.

In addition to the seven screens at Zoo Palast and the screen at Astor Film Lounge, Screenwriter will also be installed on eight screens in Braunschweig’s Multiplex C1 cinema – also headed by Mr. Flebbe. The Multiplex C1 is home to the prominent Filmfest Braunschweig event, which will utilize Screenwriter to manage its content and scheduling.

Screenwriter features include intuitive drag and drop playlist creation, complete visibility of all content and KDMs across a site, the ability to repeat schedules at the touch of a button, integration with a cinema’s POS system and comprehensive reporting.

The Zoo Palast features projectors from both Christie and NEC, and the Screenwriter software allows content and playlists to be handled seamlessly across all devices.

Hans-Joachim Flebbe said, “We’re thrilled that our fantastic cinema is re-opening with top of the range software from Arts Alliance Media that will allow us to benefit from all digital cinema has to offer. After examining all our options, we felt that AAM’s Screenwriter was the most stable TMS on the market, and were impressed with the way it could easily work with our multiple different servers and projectors to provide us a reliable and easy service to manage our operations.”

Harry Schusterov, Arts Alliance Media’s Sales Manager Germany, Austria & Switzerland added “The Zoo Palast is an iconic cinema in Berlin, and the renovation has made it one of the most luxurious and prestigious venues in the city, so we’re of course delighted that our cutting edge software has combined with the historic site to make their operations easier and quicker and allow customers the best digital cinema experience. Being able to operate with different servers and projectors, as well as operating in a separate networked site, is a great showcase for what Screenwriter can do. We at AAM congratulate Hans-Joachim Flebbe and the Zoo Palast on the reopening of this great site.”