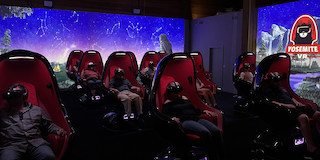 The marquee VR film, Experience Yosemite, is a 15-minute cinematic immersive journey through the wonders of Yosemite Valley.  Produced by City Lights and narrated by Bryan Cranston, the new VR film features motion, scent, and haptics to give visitors an unforgettable journey.

In addition to Experience Yosemite, the Positron XR Cinema will feature a slate of VR films from award-winning creators and directors, taking guests into places they may never visit on their own, such as outer space or the top of Everest.

"We are excited to bring this futuristic technology to Yosemite Cinema and allow visitors to experience Yosemite National Park in a way that they otherwise never could," said Yosemite Cinema CEO Keith Walker.

Positron CEO Jeffrey Travis said, "Positron is proud to partner with Yosemite Cinema to launch the first permanent XR Cinema in North America with its most advanced Voyager VR chairs showcasing premium content. With millions of visitors coming to Yosemite National Park every year, we expect this immersive experience to become a highly popular attraction.”

This was a labor of love and being able to share the awe-inspiring experience at a theatre of this caliber is a great honor," said Joel Newton, co-founder of City Lights and director of Experience Yosemite. "We're excited to have the audiences immerse themselves in the film and revel in the beauty that is Yosemite."

The Positron XR Cinema at Yosemite Cinema opened to the public on July 11.