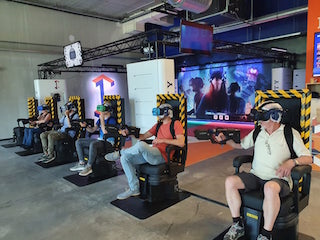 A unique concept in France, Illucity location-based entertainment centers offer three types of immersive and interactive virtual reality experiences and content for visitors of all ages: Laser Game VR, Escape Game VR and Arcade VR. Illucity has shaped its singular identity by combining entertainment and disruptive innovation. Each space is staged and designed to allow players to enter an abstract dimension before they even start playing.

Illucity Brest’s 200 square meter game area can accommodate up to 10 players at a time and features a unique Laser Game VR experience with the critically acclaimed Toyland: Crazy Monkey, an original adventure game co-produced by Illucity with France’s BackLight Studio in which teams of three-six players equipped with backpack PCs roam freely over 100 square meters of haptic floors before settling into motion-controlled seats to complete the full-body immersion, as well as popular Escape Game VR experiences such as the Assassin’s Creed Beyond Medusa’s Gate and Escape the Lost Pyramid escape rooms.

In 2021, the site will treble in size to 600 square meters, with two additional game areas, to welcome 26 players simultaneously with an expanded catalogue of more than 15 different interactive experiences.

Located in the heart of the city, Les Ateliers des Capucins is a stunning industrial cathedral, offering a magnificent vista of the bay of Brest. The iconic landmark of the Plateau des Capucins, with its new eco-neighborhood, was an ancient convent converted into industrial workshops and is now a bustling leisure hub, featuring an indoor climbing centre, microbrewery, coffee shop, restaurants, concept stores, co-working space and a multimedia library.

“With Illucity, we have set ourselves the goal of offering the best available experience for this emerging technology, which has a great future ahead of it,” says Frederic Verdière, Deputy CEO of Illucity. “We are pleased to open our third French park within the Ateliers des Capucins, a monumental structure which nevertheless exudes a warm, family atmosphere with original businesses whose desire to provide quality offerings is obvious. Having had to delay the launch by three months due to the current health crisis, we are thrilled to have been welcomed with tremendous word-of-mouth from customers enthralled with Illucity’s cutting-edge VR experiences, which can be enjoyed by all with friends, family or even colleagues.”

Having implemented strict protective measures against the spread of COVID-19, Illucity’s Paris-La Villette site reopened on June  24while Illucity Marseille welcomed visitors beginning June 13. The health measures adopted at all three venues include the compulsory use of personal protective equipment such as face masks, the provision and use of alcohol-based sanitizer gels, physical distancing, the cleaning and disinfection of all VR equipment before and after each player, and stringent cleaning of all premises throughout the day.