Warner Bros. Pictures intends to release up to five titles in CJ 4DPlex’s ScreenX format within the next twelve months. The films announced to date include The Nun in September, Aquaman in December, and Shazam! in April 2019, with additional titles to be confirmed later this year. This will build on the success of Rampage, which was released earlier this month in the panoramic, 270-degree, premium cinema format. 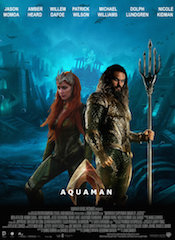 “Warner Bros. continues to be our strong partner, and we are thrilled to release five new titles from their upcoming film lineup,” said Byung-Hwan Choi, CJ 4DPlex CEO. “We look to expand the reach of this new technology that we feel will change the moviegoing experience for the better in the years to come.”

“As we look toward the future, we are excited to bring new films to theatres that take advantage of innovative formats like ScreenX,” said Thomas Molter, executive vice president of international distribution and exhibition strategy, Warner Bros. Pictures. “As a company, we’re always looking to engage audiences by telling great stories in unique ways, and CJ 4DPlex allows us to utilize new technologies that bring an immersive experience to film-goers.”