Warner Bros. Pictures announced today a multi-picture deal with the Korean cinema technology company CJ 4DPlex that will see up to six new films released globally in 2019 in the immersive 270-degree ScreenX format. The agreement extends the relationship between the two companies that previously included five films in 2018. 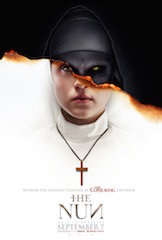 Under the agreement, the Studio's slate of ScreenX releases will include New Line Cinema's Shazam! on April 5th and The Curse of La Llorona on April 19th, followed by Warner Bros.' and Legendary Pictures' Godzilla: King of the Monsters on May 31st, with three additional titles to be announced in the coming months. This will build on the success of the globally successful ScreenX engagements of Rampage, The Meg, The Nun, Fantastic Beasts: The Crimes of Grindelwald and Aquaman.

ScreenX is the world's first multi-projection theatre technology that allows a 270-degree panoramic movie watching experience. ScreenX allows the audience to go beyond the frame of the traditional movie screen, utilizing a proprietary system to expand the center screen image to the side walls, surrounding audiences with imagery and providing a sense of being inside the movie.

"Warner Bros. Pictures continues to be a strong supporter and partner of the ScreenX cinematic experience, and we are beyond excited to grow that partnership with a release of six titles from their upcoming film lineup,” said JongRyul Kim, CEO of CJ 4DPlex. “We continue to expand this new technology to an ever increasing and loyal consumer fan base that will help shape the movie-going landscape for years to come."

"As we look toward the future, we are excited to bring new experiences to audiences and continue to expand our partnerships to leverage innovative formats like ScreenX," said Thomas Molter, head of international distribution at Warner Bros. Pictures. "As a company, we're always looking to create unparalleled theatrical experiences for moviegoers, and CJ 4DPlex works with us to showcase great stories in unique new ways."

There are now 195 ScreenX auditoriums worldwide. The company expects to nearly double that number in the coming year.