Dar Al Arkan has signed an agreement with Majid Al Futtaim to open a new 15-screen multiplex at Dar Al Arkan’s Al Qasr Mall in Riyadh. The multiplex is scheduled to open in the first quarter of 2019 and will include Vox Cinemas’ signature Kids and Max experiences. 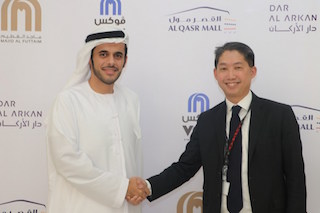 The deal involves a major retail transformation of an existing section of the mall, which will include the addition of more outlets for casual dining and entertainment, including indoor bowling. The deal was officially signed in Riyadh and construction has already started.

“The company is considered the largest cinema operator in the region. It offers the most innovative and customer focused cinema experience, including the latest cinematic technology and a range of different cinema concepts to suit different consumer expectations,” Al Shelash said.

“These are exciting times for Saudi Arabia and we are delighted to be playing a small but significant part towards achieving the Kingdom’s Vision 2030, which aims to build an entire ecosystem for arts, tourism and entertainment,” he added.

Vox Cinemas opened its first cinema – the Kingdom’s second – in May this year at a new entertainment complex in Riyadh Park.

In July the Dubai-based firm announced plans to open the first multiplex in Jeddah at Red Sea Mall by December. It also plans to open at least four IMAX theatres in Saudi Arabia following the Gulf kingdom's decision to lift a decades-old ban on the industry.

The plans are part of Vox Cinemas’ overall expansion plans for the kingdom, where it will invest an additional $533.2 million to open 600 screens over the course of the next five years.

Vox’s parent company, Majid Al Futtaim, has already announced project investments valued at $3.73 billion across its mall asset, fashion, leisure and retail offerings, a commitment that is expected to create over 114,000 direct and indirect job opportunities.