The board of twofour54 Abu Dhabi has appointed Michael Garin as its CEO. Following the formation of a board of directors for twofour54 last July and the appointment of H.E. Mohamed Khalifa Al Mubarak as chairman and the then CEO H.E. Maryam Eid AlMheiri as vice chair, the CEO position became vacant. 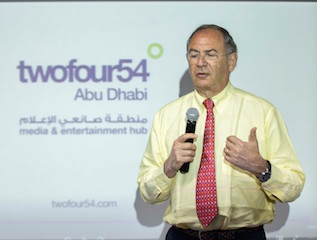 “On behalf of the board, I would also like to thank Maryam for her dedication and leadership as CEO of twofour54,” Al Mubarak said. “Under her guidance, the media zone has achieved multiple milestones, and is today home to more than 500 media firms.” In her role as vice chair, Her Excellency will continue to offer guidance and support as twofour54 continues to grow, develop and attract media companies of all sizes and productions from around the world.

The board launched a search for a new CEO, seeking a candidate with robust business acumen and extensive experience in the media sector. Garin, who has more than 50 years’ experience as a media executive, comes from Image Nation Abu Dhabi, the award-winning film and entertainment company. Among his responsibilities as its CEO has been to oversee the firm’s strategy and operations as well as managing and forging key international partnerships.

Al Mubarak said, “Michael has been a key contributor to the development of the media industry in Abu Dhabi for more than a decade, playing a key role in its success through his work with Image Nation and Abu Dhabi Media, among other roles. “I have personally enjoyed a long and trusted partnership with Michael, working closely together to develop Image Nation as one of the world’s leading TV and film producers and biggest production company in the Middle East. Michael joins twofour54 at a pivotal time for the media and entertainment industry in Abu Dhabi, with a new chapter about to start for the media zone at the purpose-built new home on Yas Island. We are delighted that he will bring his extensive experience and expertise to twofour54.

Garin said, “I would like to thank Mohamed, Maryam and the board of twofour54 for giving me the opportunity to undertake this important role in the capital both for Arab-language and international content creators, and to lead a team of incredible UAE talent. Together, we will continue the mission to grow the media sector in Abu Dhabi by providing world-class infrastructure and 360-degree support that ensures our creative community can bring their ideas to life and attracts the best in the business from around the world.”