Trevor Forrest Weathers the Storm to Shoot Drunks for Grabbers 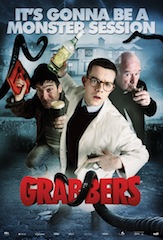 Cinematographer Trevor Forrest recently shot the genre-bending Grabbers, which opens in the United States July 19. Grabbers is a throwback to classic sci-fi monster movies with a comedic twist. When giant, bloodsucking aliens show up on earth and start killing people, a local cop discovers the only way to defeat the aliens is to get really, really, really drunk. According to IMDb, director Jon Wright took stars Richard Coyle and Ruth Bradley out drinking to prepare for their roles.

Blend in some romance and stunning Irish coastal vistas and you have a unique motion picture. Reviewing Grabbers at last year’s Sundance Film Festival premiere, Variety said, “Trevor Forrest's widescreen lensing of County Donegal scenery is a highlight in the pro package.”

“Cinematographer Trevor Forrest has lensed the Irish coastline with reverence and pride, catching the sun in just the right position to really bring the Donegal scenery to life," says British website HeyUGuys. “Whether his camera is pointed at the landscape, a carefully crafted set or the gloopy discharge of one of the film’s slimy antagonists, it does so with the utmost respect and proficiency. This gloss adds impressively to the production values, giving the film an assured and cinematic quality that was perhaps beyond its means.”

Grabbers opens with sequences of pure suspense, then partway through, the movie skillfully segues into humor. Expertly matching the cinematography to the script, Forrest combined the atmospheric spectacle of sci-fi with skillfully-handled sight gags and scenic island romance.

All this despite the crew battling the worst weather conditions in Ireland’s last hundred years, with extreme gale force storms and freak blizzards making frequent uninvited set visits. The resourceful Forrest worked with the conditions to make the bad weather look good on film.