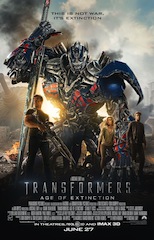 Transformers: Age of Extinction, a blockbuster produced by Paramount and Jiaflix was the highest grossing imported film in Mainland China for the first half of 2014. The movie is the China Movie Media Group’s first collaboration with a U.S. Studio, Paramount Pictures.

Transformers was simultaneously released in Mainland China and North America on June 27. Within the first three-day weekend, it shattered several records and made history in China’s movie industry.  “The cooperation between CMMG and Paramount on TF4 is significant. Paramount created the world’s top film while CMMG the full range of marketing services for TF4, which helped attract more Chinese audiences to come to the theaters. Because of the efforts of both Paramount and CMMG, TF4 will become the blockbuster with the biggest box office in Mainland China this year and we couldn’t be more gratified,” says Zhang Gen Ming, CEO and founder of CMMG.

As the official promotional partner of TF4 in Mainland China, CMMG was in charge of the comprehensive marketing campaign in China, including outdoor advertising, new media promotion, and road show activities, among others. CMMG was also responsible for the organization, planning and carrying out the China premiere, which was held in Beijing on June 23. Rob Moore, the vice president of Paramount, director Michael Bay, actors Mark Wahlberg, Jack Reynor, Nicola Peltz and Li Bingbing attended the premiere.